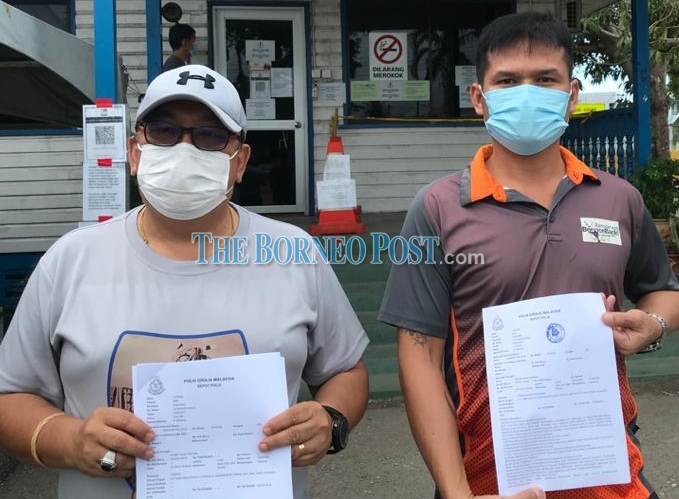 Bobby William (left) accompanied by another PBDS Baru member lodged a police report at Lutong Police station on Sunday (March 14) against a woman who allegedly making seditious remarks against the Christians in a video, which has now, viral on social media.

MIRI (March 15): Parti Bansa Dayak Sarawak (PDBS) Baru yesterday lodged a police report against a woman for allegedly making seditious remarks in a video which has been posted on social media.

PBDS Baru president Bobby William in a statement here today, said the party wanted the police to thoroughly investigate the woman in the video for making remarks that were deemed seditious and with the intend of creating chaos among the people in the country.

“This kind of incident should had not happened in Malaysia. We are multi-religious country and that Malaysia is not owned by one single race and religion.

“This woman (in the video) must be investigated and sentence to maximum jail to serve as lesson to all Malaysians,” Bobby said.

He was referring to a video posted on the social media, where a woman had questioned the High Court’s decision that Christians nationwide can use the word “Allah” and three other Arabic words in their religious publications for educational purposes.

She also warned the Christians not to test the patience of the Muslims in the country.

Later in the video, the woman said that Islam is the Federation’s official religion and warned the Christians not to challenge her and her team to take action to close all of the churches in the country and destroy Christians.

Bobby said by making such statement, the woman had challenged the existing harmony and stability that the country is enjoying and caused anger to the people especially of those in Sabah and Sarawak who had been living in peace.

“She did not show any respect and tolerance to others and there could be a hidden motive to cause racial and religious tension among the multi-religious people in this country,” Bobby added.

Hence, he said PBDS Baru wanted the authorities to quickly investigate the matter and take action under Section 4(1) of the Sedition Act 1948 and Section 298 of the Penal Code against anyone including the woman in the video who are using the social media to play up racial or religious issues.