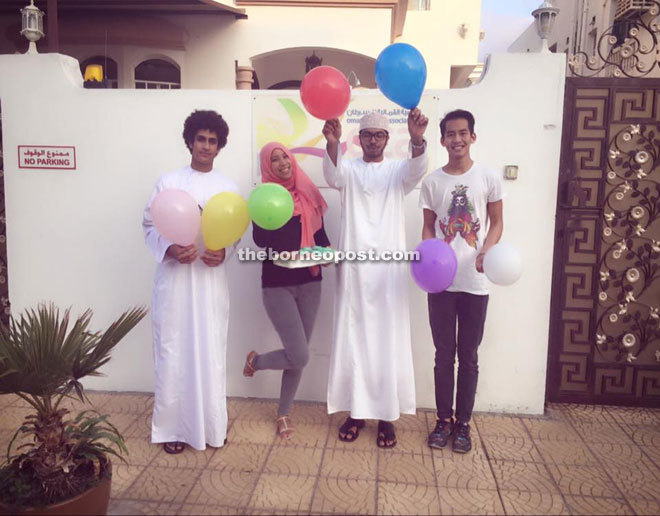 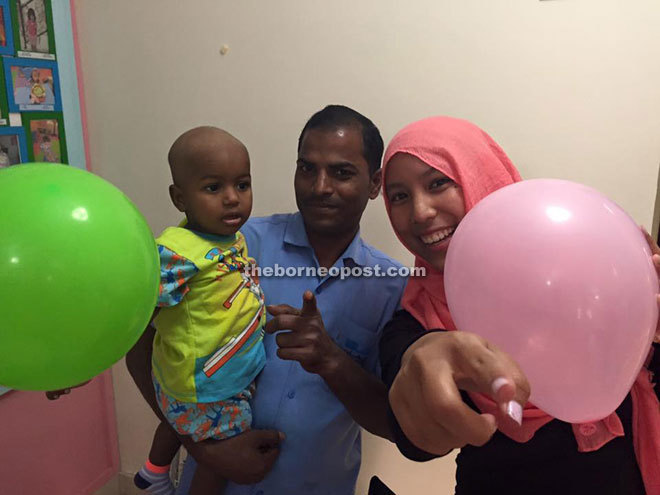 Aziza cheers up a child during the programme at Oman’s Cancer Association. 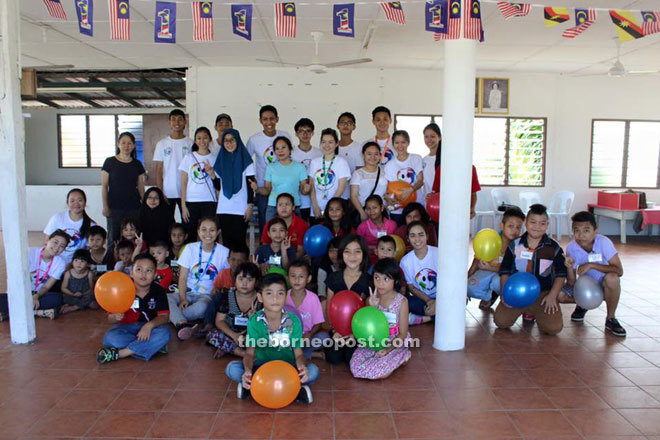 PTW members gather for a group photo at the year-end programme in Miri. 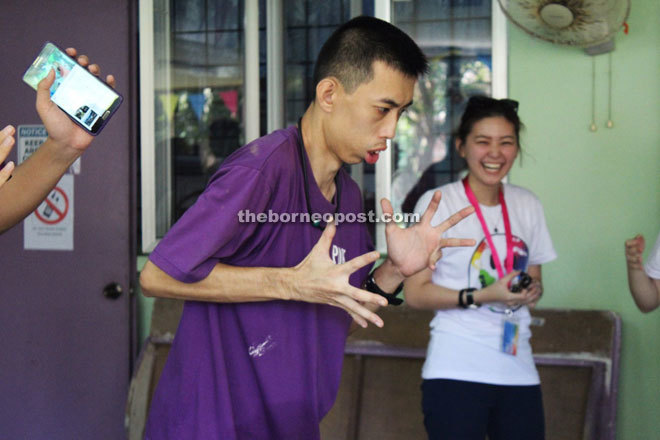 A resident of a centre for autism in Miri performs the ‘Gangnam’ dance. 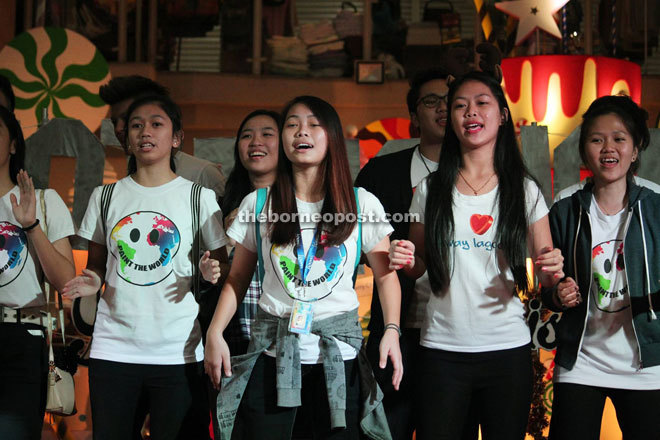 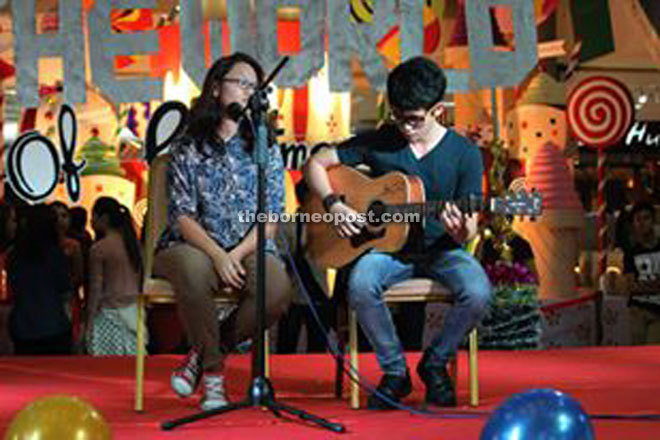 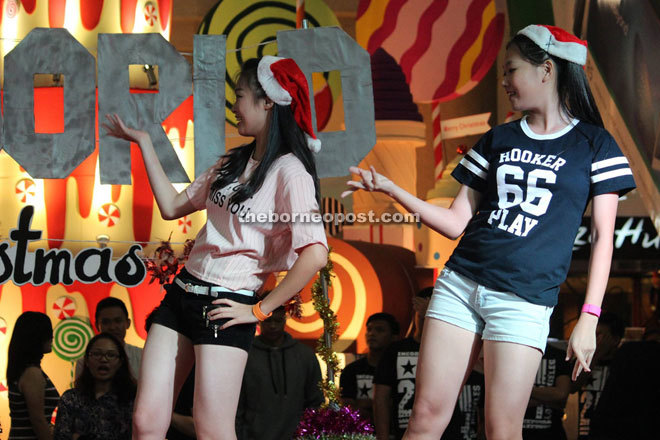 KUCHING: Miri-born Aziza Aznizan never thought a movement she founded last year could get international attention in such a short time.

The 19-year-old, who is a student at United World College (UWC) in the UK, set up ‘Paint The World’ (PTW) with her seven varsity mates in January last year.

“We began with Miri. After that, we managed to engage more Malaysians who helped us expand PTW to Kuching and Johor Baharu — bringing the number of youths taking part in the movement to more than 1,000.

“We then established our presence with the help of some UWC students in the UK, France, Netherlands, Belgium, Georgia and the latest, Oman,” she told The Borneo Post in a recent interview.

She noted that despite the difference in culture, language, society and background, the PTW movers in these nations shared one thing — an appreciation for love and peace.

She highlighted PTW Oman as a case in point.

“Together with four friends, I set up PTW Oman on Jan 4 (this year) during a visit to that country. Almost nobody spoke English there — just Arabic. Still, it wasn’t really that hard to express our message with the folks there. We made people smile there – it was a satisfying feeling to be able to make someone smile.”

Aziza said during the programme, they headed to Oman’s Cancer Association and spent some time with the children.

“We brought balloons and cupcakes for the children. Several students from UWC helped us there, including two Omani youths, Yousuf Al Salmi and Omar Al-Ismaili.

“There were no borders — I’m a Malaysian in Oman but at the time, I felt like I was part of the family there. I made many new friends including Omani online celebrity Mayya Al-Said, who is an avid blogger, YouTuber and Instagrammer.

Mayya and several painters from Oman will attend PTW Malaysia 2.0 concert to be held in Miri on Aug 6.

“For me, this is just the beginning of Oman-Malaysian collaboration,” she said.

On her PTW movement, Aziza and her team had been running a number of programmes that focused on helping the needy and encouraging youths from all over the world to come and work together for a good cause.

In December last year, they held the #PTWRoadtrip, #PTWChristmasCarol, and PTW’s ‘Gift of Christmas Showcase’.

She highlighted the #PTWRoadtrip, conducted on Dec 3, as clearly youth-oriented.

It involved 20 young painters joining the journey around Miri.

“The trip, led by Clinton Chua and Clarissa Wee, aimed to encourage youths to engage with us (PTW); to understand what we actually do and why we do it.

“Apart from charity, it was also aimed at getting Miri youths out of their ‘pretty little bubbles’, making them understand what life really was about. These new batch of young painters got to experience the whole process of PTW events which included visits to orphanages, juvenile centres, schools and autistic centres in and around Miri city,” she said.

Aziza mentioned their Christmas carolling in Miri from Dec 10 to 18, involving 15 painters.

“Who knew carolling could bring so many people together and forge new friendships. After that on Dec 20, PTW Miri hosted the ‘Gift of Christmas Showcase’ at Bintang Megamall, where more than 100 Mirians were treated to performances by 10 young talents comprising singers, dancers, guitarists, violinists and beatboxers.

“It was a successful show, bringing together people of different faith, race and background,” she said.

On upcoming activities, Aziza said they would be holding ‘Paint The World Festival’ at CityOne Exhibition Centre here from Jan 23 to 24.

It would be run with help from local youths, including students from Technology College Sarawak led by Nazreen Hussain.

The event would be made more vibrant with participation of artistes such as CQ Music, well-known YouTubers in the likes of Nanasheme, Viners and Aiman Afiff, as well as deejays from Hitz FM, Era FM and Cats FM.

“In March, a number of Malaysian painters will fly to Georgia for the ‘PTW Project Week’ where we will be meeting the Georgian minister in that republic’s parliament, go on live television interviews, visit poverty-stricken areas on the outskirts of the nation’s capital Tbilisi, as well as orphanages and cancer centres there.”

Aziza said she just could not wait to see her fellow Malaysians make new friends along the trip.

She was beyond proud to declare that despite gathering painters and those who were passionate about the arts, PTW was a ‘colour-blind’ movement.

“Throughout the PTW events around the world, I could see youths of different races and faiths – Jews, Christians, Muslims and Buddhists – working together. They are the ones we can count on becoming responsible and peaceful citizens of the world.

“This is what we call friendship and love without boundaries,” she said.