Outpouring of sorrow, outrage from Opposition leaders for Bill Kayong

Bill was a vocal activist for the natives of Sarawak, fearless in his passion about native land rights. He was a young man zealously pursuing justice for the people and was very outspoken against any kind of discrimination or unfairness in our society. – Baru Bian, State PKR chairman. 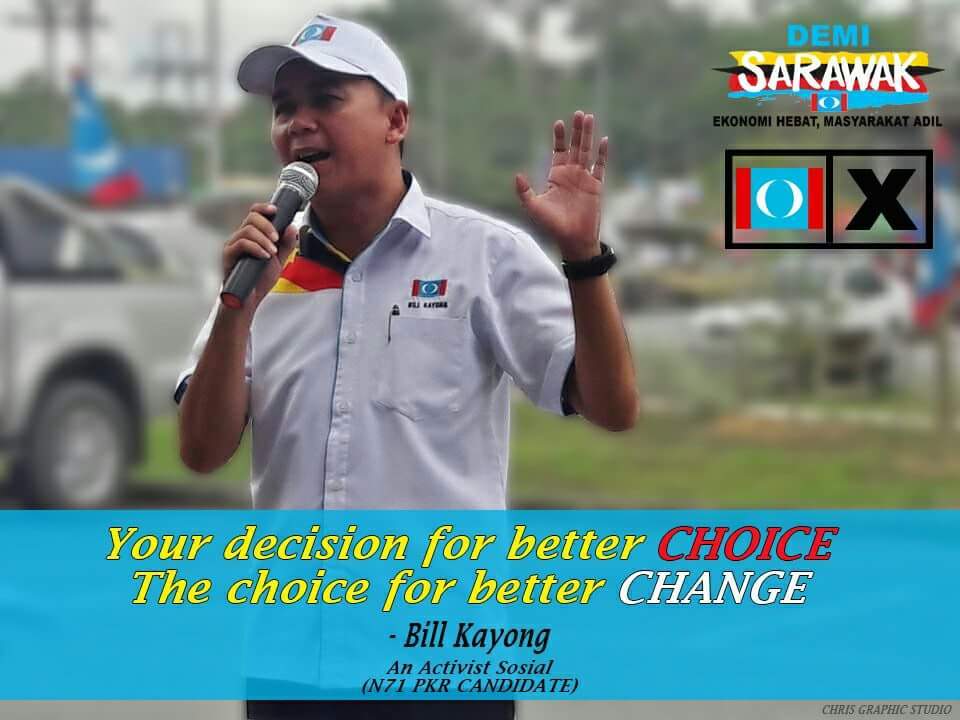 One of Bill Kayong’s campaign posts on Facebook during the last state elections.

KUCHING: News of the assassination of PKR Miri branch secretary Bill Kayong this morning sent shockwaves across the nation as Opposition leaders on both federal and state levels call for justice and mourn a dedicated colleague.

“Bill Kayong was an activist and committed PKR member to all reformation agenda. He had been raising the issues that were close to the hearts of Sarawakians, including the native customary right (NCR) issues that he often raised during the last state election,” they said in a joint statement today (June 21).

The 43-year-old Bill, who was Miri MP Dr Michael Teo’s political secretary and PKR candidate for Bekenu in the last state election, was shot dead with a shotgun by an unknown person while he was waiting in his Toyota Hilux at a traffic light intersection in Lutong, Miri.

State PKR chairman Baru Bian said he and other party members were shocked to hear about the death of loyal member Bill at the hands of a killer, adding that words could not begin to express their sorrow and outrage that Bill was so brutally and coldly shot and killed.

“Bill was a vocal activist for the natives of Sarawak, fearless in his passion about native land rights. He was a young man zealously pursuing justice for the people and was very outspoken against any kind of discrimination or unfairness in our society.

“He was an active member of PKR and was the secretary of our Miri branch. Bill stood as our candidate for Bekenu in the recent Sarawak Elections. He was a man with a mission and had so much more to experience and contribute. We have lost a loyal comrade and a good friend, and Dr Michael Teo, his trusted aide,” he said in a press statement.

Baru, who is Ba Kelalan assemblyman, said the party members were waiting for details about this heinous crime and urged the police to be relentless in their investigations so that the culprits could be brought to justice.

“We offer our deepest sympathy to Bill’s family for their loss. Bill’s young children can be proud of the dedicated and committed man their father was. We pray that the family will find the strength and fortitude to bear this unimaginable grief. We thank Bill for being part of the PKR family and for journeying with us thus far. We will miss him.”

State PKR vice chairman See Chee How, when contacted, strongly condemned such act of extreme violence and called on anybody with information on the assailant(s) and the vehicle used, to inform the police, who he certainly hoped were now vigorously hunting for the suspect(s).

“We have lost a diligent party leader and a well respected native rights activist who was friendly to everybody and bore no grudges to political adversaries or antagonists. Personally, Bill was more than a close friend.

“With the works that we had been doing together for the past decade, we had treated each as a family member. Many party colleagues and activists in the state will share that feeling towards Bill, remembering the good and helpful person that he had been and continue the good works and causes that he helped advocated and contributed.”

Meanwhile, state DAP chairman Chong Chieng Jen said: “On behalf of DAP Sarawak, I would like to express my deepest condolence to the family of Bill Kayong. I am deeply sorry and feel shocked to hear of the incident. His demise is a loss to the State.”

Chong, who is Kota Sentosa and Bandar Kuching MP, said such a cold-blooded murder was something that nobody wanted or expected to see happen, especially in the peaceful land of Sarawak.

“It begs the question to all Sarawakians: Is Sarawak as safe a place as we all perceive it to be, that someone can be shot dead in broad daylight in a public place? I call upon the Police to top-prioritise the investigation of this murder case.

“It is a cold-blooded murder in broad daylight with firearms. A life was lost. These facts alone, is sufficient to make it a top-priority investigation case.”

He said the added implication and importance of the incident is that the late Bill Kayong was an opposition politician and a strong advocate for NCR land cases.

“The public perception of his assassination is that it is either politically motivated or linked to the NCR cases which he was fighting for. Therefore, it is of utmost importance that the police must immediately take action to investigate the murder.”