Organisers want BCFF 2017 to be a success 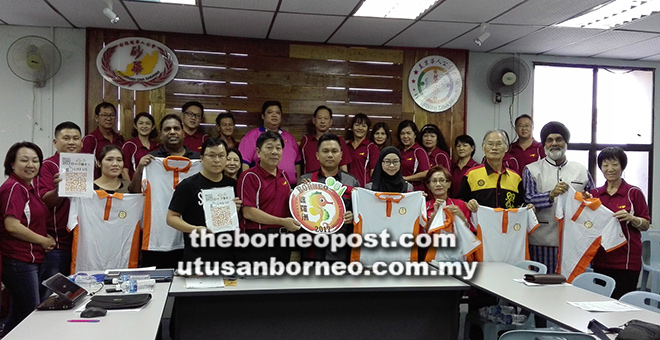 Ting (front row, second left) together with the organising committee showing the logo of the event as well as poster of their Facebook page and t-shirts.

President of the association, Ting Pang Soon, said the festival will be held from Nov 24 until Dec 3 this year from 3pm to 10pm at the Boulevard open car park.

“We want this festival to serve as the best occasion to further strengthen the existing racial unity that allows us to live in harmony with each other,” he stated in a press conference on BCFF at the association’s premises here on Sunday.

Ting further said the event is endorsed by the Islamic Information Centre.

He said Chief Minister Datuk Amar Abang Johari Tun Openg will be guest-of-honour and officiate at the opening of the festival while Minister of Tourism, Arts, Culture, Youth and

Organising chairman of the festival, Harry Lee, at the same press conference said the event would be featuring some 100 stalls to promote local food, handicrafts and other items related to culture and services.

“Members of the public can expect more during the ten days of the event such as entertainment, cultural events, exhibitions, food and beverage.”

He encouraged those keen to set up stalls at the festival to get the application forms and submit the completed forms before Sept 30.

“Size of the stall will be 20’x20’ and there will be a commercial zone for those who want to promote their products.

In addition, ‘The Best Decorated Stall’ competition offering RM1,000 cash for the winner, RM500 for second place and RM300 for third place, will also be held among the stalls.

Later at the same function, the organising committee launched the festival’s logo, Facebook page and t-shirt.