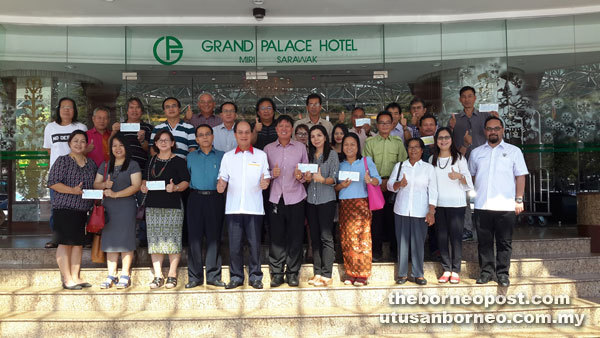 MIRI: The Orang Ulu community in Mulu constituency has given their thumbs-up to Chief Minister Datuk Patinggi Tan Sri Adenan Satem for allocating over RM2.7 billion for rural development next year during the recent State Legislative Assembly (DUN) session.

Mulu assemblyman Datuk Gerawat Gala said the State 2017 budget tabled in DUN showed that Adenan and the state government are concentrating on narrowing the development gap between urban and rural areas in the state.

“We, the Orang Ulu community in Mulu constituency, are thankful to CM Adenan as the people here really need these developments, including infrastructure,” Gerawat said during a function to present Minor Rural Project (MRP) grants at a hotel here yesterday.

According to Gerawat, Mulu is one of the many rural constituencies in Sarawak which still needs more development and Adenan’s move to narrow the rural and urban gap will help to uplift the economic and living standards of a majority people living in the interior.

He said the increased budget next year will accelerate growth in the remote areas and improve the welfare of rural folks.

Gerawat disclosed that other plans in the process for his constituency next year included construction of more roads, better clean water supply, electricity, telecommunication and more effective resolution of NCR land issues.

Speaking on road connectivity for this year, he said a contract was given to Samling to improve logging roads in the constituency so that the people could access communication and major towns and cities from their villages.

On top of that, he said, hundreds of kilometres of abandoned logging roads in Tinjar and Baram are being upgraded and improved with culverts, maintenance and through state government programmes, including in Lio Matu and Long Jee.

Gerawat said: “Like in Kuala Tutoh which is not accessible by road, JKR (Public Works Department) is clearing the land to make a road link now and this will open up more roads connecting Mulu with nearby constituencies like Marudi and Telang Usan.”

On electricity, he said, the Ministry of Public Utilities had started the Solar Hybrid programme to power longhouses and villages located in remote areas which are not linked to the electricity grid.

He also disclosed the government was set to supply water to rural areas in Mulu constituency in stages.

Gerawat also expressed hope that with the increased budget, Mulu constituency would not only be able to enjoy better telecommunication access but also better internet coverage which is currently not good.

“Schools, clinics and critical government departments are given priority for internet linkage if these communication links are installed in the constituency…. At the same time, the people of Mulu are thankful to Adenan as they really need these developments,” he disclosed further.

Meanwhile, he called on villagers in Mulu constituency to set up their own area development committees to oversee progress and their development needs as well as to ensure applications to the government did not overlap.

He also urged villagers to give feedback and work together as well as inform him if there were issues or developments that required looking into.

“What is important is we must look at areas that need development and that can help the community,” he added.

He said, with roads connecting all the areas in the constituency, the local community’s development and economy will be lifted up as they have better access to nearby towns and Miri city.

“Road connectivity is top priority in Mulu followed by electricity and clean water,” he said, thanking Adenan for his farsighted vision for the state’s rural communities.

One of the MRP recipients, Charles Baya, who hails from Long Terawan echoed Gerawat and Gary’s views that Mulu constituency’s potential could be further developed but that infrastructure such as water and electricity are much needed.

He added, the Orang Ulu community wished to thank the Barisan Nasional (BN) government under the wise leadership of Tok Nan (Adenan) who has changed the landscape of rural development with his foresight.