One of Miri’s oldest schools set for reopening next year 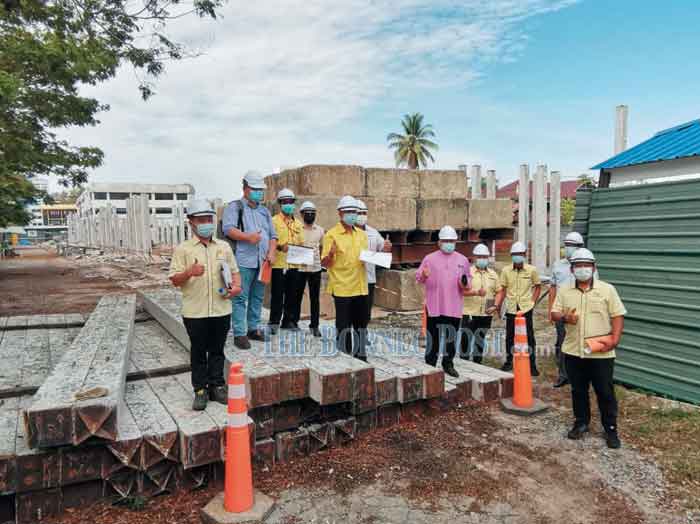 Ting (standing on steel beams – front, centre) and those accompanying him gesture thumbs-up during the visit to check the progress of workson SK Sayed Othman.

MIRI: The upgrading works on SK Sayed Othman, one of the oldest schools here, are on track towards completion and reopening next year, assures Assistant Minister of Tourism, Arts and Culture Datuk Sebastian Ting.

According to him, the RM7.94-million project was approved by the Ministry of Education after the Public Works Department (JKR) deemed the old wooden building was unfit for occupation, following an incident in 2016 where the floor collapsed – resulting in a pupil being injured.

The project, which kicked off in September last year, is scheduled for completion by March 16 next year.

The works include the demolition of the old school block and the construction of two new four-storey blocks – set to house nine classrooms, the administrative area as well as other facilities.

“I’m happy that this project is on track and the contractor has assured us that it would be delivered on schedule,” said Ting, who is Piasau assemblyman, when met by reporters during the site visit yesterday.

Adding on, he said the reconstruction of the school was proposed during the era of Tan Sri Peter Chin (former Miri MP) being a federal minister, and this gathered further momentum following a visit by the then-Deputy Minister of Education Datuk Dr Mohd Puad Zarkashi to the dilapidated school.

Ting also hailed SK Sayed Othman as ‘a historical institution in Miri’ – construction commenced in 1959 and the school opened for classes in 1962.

Back on the project, he said upon completion, the new blocks should be able to accommodate over 400 pupils compared to over 100 currently.

It is informed that for now, SK Sayed Othman’s pupils are being temporarily placed at SK Miri during the construction period.

Later, Ting visited another school, SK Anchi, to check on the progress of works there.

The post One of Miri’s oldest schools set for reopening next year appeared first on Borneo Post Online.