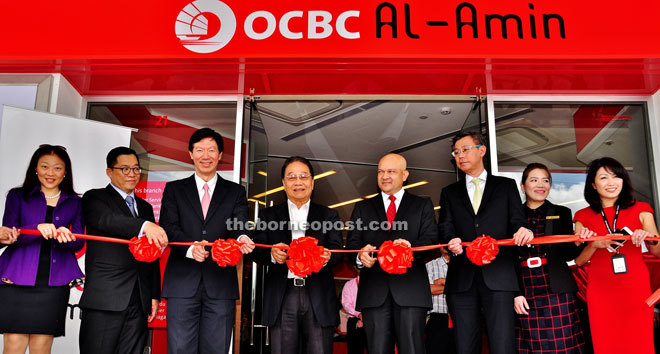 From third left, Ong, Wong and Aziz with others at the cutting of ribbon to mark the opening of OCBC Al-Amin Sibu branch.

SIBU: OCBC Al-Amin Bank Berhad (OCBC Al-Amin) yesterday gave a sum of RM30,000 to three organisations here in conjunction with the official opening of its branch in Sibu.

Rotary Club of Sibu, the Association for Children with Special Needs Sibu and Sibu Chinese Chamber of Commerce and Industry each received RM10,000.

The contributions were meant for the three organisations to carry out activities beneficial to the needy children.

OCBC Al-Amin chief executive officer Syed Abdull Aziz Syed Kechik said this is in line with the bank’s policy of engaging with the community in meeting the social needs of people in areas where it provides banking products and services.

He was speaking at the official opening of the bank’s Sibu branch by Second Finance Minister and Minister of Local Government and Community Development Dato Sri Wong Soon Koh.

According to Aziz, the bank had set its sights on expanding into East Malaysia since its establishment in 2008 and was pleased to see the plans coming to fruition.

“Expansion into East Malaysia has been a key part of our overall Islamic banking network-building strategy from the start. The move brings us closer to being better represented in our key markets.

“We are proud to highlight also that our Sibu branch houses the very first Islamic Premier Banking Centre in East Malaysia, and only the third nationwide after Kota Kemuning, Shah Alam and Skudai, Johor,” he said.

It opened its branch in Sandakan, Sabah in December last year.

OCBC Bank now has five branches in East Malaysia, including the three branches in Kuching, Miri and Kota Kinabalu.

Between now and Feb 29, the bank is offering special promotions for those opening accounts at its Sibu branch, including preferential Fixed Deposit-i rates above the regular board rates, a gold-plated OCBC junk replica for new Premier Banking customers, and 50 per cent off the first year’s rental of safe deposit boxes for new Premier Banking customers with Assets Under Management of more than RM1 million.

OCBC Bank is the longest established Singapore bank, formed in 1932 from the merger of three local banks, the oldest of which was founded in 1912.

It is now the second largest financial services group in Southeast Asia by assets and one of the world’s most highly-rated banks, with an Aa1 rating from Moody’s.

Recognised for its financial strength and stability, OCBC Bank has been ranked Asean’s strongest bank and among the world’s five strongest banks by Bloomberg Markets for five consecutive years since the ranking’s inception in 2011.

OCBC Bank’s key markets are Singapore, Malaysia, Indonesia and Greater China. It has over 630 branches and representative offices in 18 countries and regions.

OCBC Bank’s private banking services are provided by its wholly-owned subsidiary Bank of Singapore, which has received increasing industry recognition as Asia’s Global Private Bank, and was voted ‘Outstanding Private Bank in Southeast Asia in 2014’ by Private Banker International.