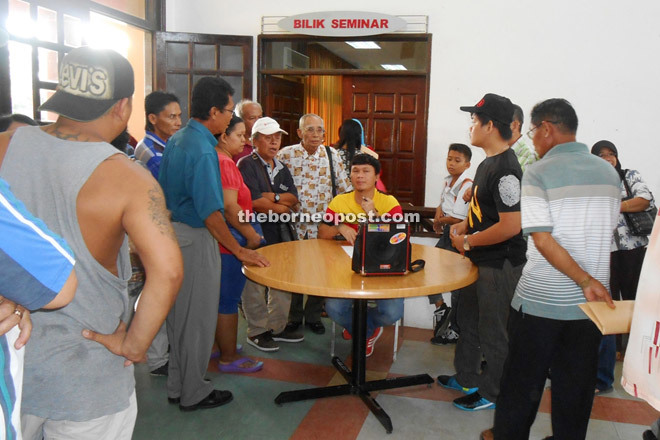 Applicants listen to a briefing by NRD officers.

MARUDI: The Mobile Unit of National Registration Department (NRD), Miri branch and officers from Kuching NRD are conducting a drive to help people from Mulu and Marudi without identification documents register themselves.

The mobile team has set up a counter in Baram Civic Centre here for a three-day registration exercise which started yesterday and will end tomorrow.

It is led by the Miri Mobile Unit head Alfrizan Bujang and Sidik Rashid from NRD Kuching.

When met at the registration centre yesterday, Alfrizan said they had so far received more than 100 applications, mostly from the Iban and Kelabit communities in Tanjong Opar, Tasong and Bario who reside in Marudi town.

He further said the response was encouraging because the people knew the importance of having a birth certificate and MyKad.

Meanwhile, TR Gerinang Kam from Logan Tasong who was leading his villagers who did not have MyKad thanked the government for setting up the mobile team to reach out to the rural people.

He said it would be a good idea if the mobile centre could be held frequently as many people did not have identification documents and some were not aware of the centre.