Last week, Australian newspaper mX added some humor in its Olympic medals table by rebranding the two Koreas into ‘nice’ and ‘naughty’ (http://www.miricommunity.net/viewtopic.php?f=1&t=53958 While most readers see that as a harmless joke, the leadership in Pyongyang is apparently not amused. North Koreas official news agency KCNA lashed out at Mx for its tongue-in-cheek reference to North Korea as Naughty Korea, accusing it sordid, foolish, bullying, degrading, incompetent, pitiful and rogue - among other things.

KCNA characterized the paper’s behavior as a “bullying act little short of insulting the Olympic spirit of solidarity, friendship and progress, and politicizing sports.” It slammed the paper as “hardly known in the world.” The dispatch went on to accuse the newspaper of having “cooked up the way of moneymaking, challenging the authority of a dignified state.”

Photos of the newspapers creative description of the two Koreas quickly circulated on social media last Wednesday, with many Twitter users enjoying the joke. North Korea occasionally hits out at foreign media, but its rare for KCNA to take aim at an obviously humorous reference to the country. Who is more naughty? North Korea’s KCNA issued long statement for it

mX said its description of the two Koreas reflected the newspapers irreverent take on the news and was widely seen for what was intended. The two teams (South Korea and North Korea) were sitting in fourth and fifth spot respectively on the medal ladder and we thought it would be a humorous, but harmless way of differentiating between the two, and a reflection on how much of the western world views the two countries, said mXs Sydney-based editor Craig Herbert.

It was in no way intended to offend the athletes or citizens of either South Korea or North Korea, he said.

"The mX tally received an enormous response online throughout the world and the overwhelming majority of readers and the social and print media community saw it for what was intended - nothing more than a bit of light-heartedness,’’ said its editors. And then, it reached North Korea. The official media KCNA issued the full statement as follow:

The Australian newspaper Brisbane Metro behaved so sordid as to describe the DPRK as “Naughty Korea” when carrying the news of London Olympics standings. This is a bullying act little short of insulting the Olympic spirit of solidarity, friendship and progress and politicizing sports.

Media are obliged to lead the public in today’s highly-civilized world where mental and cultural level of mankind is being displayed at the highest level. Brisbane Metro deserves criticism for what it has done.

The paper behaved so foolish as to use the London Olympics that has caught the world interest for degrading itself. The paper hardly known in the world must have thought of making its existence known to the world by joining other media in reporting the Olympic news.

Then it should have presented its right appearance to the world. Editors of the paper were so incompetent as to tarnish the reputation of the paper by themselves by producing the article like that.

There is a saying “A straw may show which way the wind blows”. A single article may exhibit the level of the paper.

Many people were unanimous in denouncing the small paper for defaming the mental and moral aspects of the players of the DPRK who earned recognition from several appreciative world famous media. Even hostile forces toward the DPRK heaped praises on its players’ successful performance at the London Olympics, saying that “Korea whirlwind” sweeps the world.

The Australian paper cooked up the way of moneymaking, challenging the authority of the dignified sovereign state. The paper deserves a trifle sum of dirty money. As already known, it was reported that a lot of petty thieves sneaked into the London Olympics together with tourists. Players fight to the finish in the stadium, but those petty thieves demonstrate their “skills” outside the stadium.

The paper Brisbane Metro is little different from those petty thieves. In a word, the paper discredited itself. How pitiful it is. The Brisbane Metro will remain as a symbol of rogue paper for its misdeed to be cursed long in Olympic history. The infamy is the self-product of the naughty paper Brisbane Metro which dared challenge the spirit of Olympic, common desire and unanimous will of mankind.

North Korean officials returned the insult by chiding mX as “the naughty paper.” 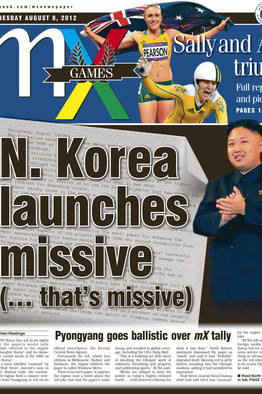 mX responded to North Korean accusation in its paper

mX, which has a readership of 700,000 in the major Australian eastern seaboard cities of Melbourne, Sydney and Brisbane, is owned by the Australian arm of News Corporation.