‘Nomination of Shafie as PM absurd and without justification’ 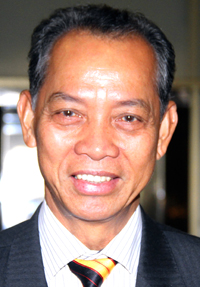 He said much time had been wasted by ‘unnecessary and never-ending political bickering’, and he called upon all politicians to focus their energy on serving the people and the country.

“As of now, the present PM (Tan Sri Muhyiddin Yassin) is doing a very good job especially during this very trying and challenging time where he has to face the Covid-19 global pandemic,” said Penguang when contacted yesterday, adding that Muhyiddin ought to be given the chance to lead the nation until the next general election. Penguang was asked for his take on the proposal made by former premier Tun Dr Mahathir Mohamad, that Mohd Shafie be the country’s next prime minister, while PKR president Datuk Seri Anwar Ibrahim be made Deputy Prime Minister I, and Datuk Seri Mukhriz Mahathir as Deputy Prime Minister II.

On Saturday, Dr Mahathir said this proposal had been agreed upon during a meeting attended by Mohd Shafie, Amanah president Mohamad Sabu, and DAP leaders Lim Guan Eng and others. Notably absent from the meeting however was Anwar himself and representatives from PKR. Anwar subsequently released a statement calling for the people to reject ‘politics of deceit’.

Meanwhile, DAP Sarawak secretary Senator Alan Ling said the party was excited over the proposal and would be backing Mohd Shafie as the next prime minister.

“For the first time, an East Malaysian is proposed to be PM candidate. This is indeed a historical move and an excellent opportunity. This, however, would become true only if Gabungan Parti Sarawak (GPS) under the leadership of Datuk Patinggi Abang Johari Tun Openg, had the wisdom to be aligned to this new formula; to bring Sabah and Sarawak out of the decades-long predicaments in the federation,” said Ling.

The post ‘Nomination of Shafie as PM absurd and without justification’ appeared first on Borneo Post Online.