‘Nobody wants to be near new transfer station’ 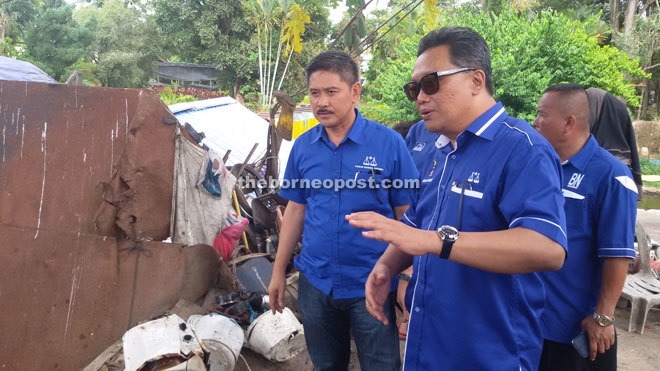 Abdul Rahman (right) explaining to Ripin what should be done about the transfer station during the visit there yesterday.

MIRI: The government is facing difficulty is finding a new site to relocate Lambir Solid Waste Transfer Station which is plagued by various environmental issues.

Minister of Urban Wellbeing, Housing and Local Government, Datuk Abdul Rahman Dahlan said the rapid development in Miri is making it hard for the government to identify a strategic location for the new transfer station.

“My worry is that as Miri is rapidly developing, finding a land for the station will be a problem as when we finally identify a suitable area, we find that no one wants the station to be near them.

“This is a challenge that must be resolved by the local and state authorities,” he told reporters

after visiting the station on Monday.

Coming to the transfer station for the first time, Abdul Rahman was astonished by Miri City Council’s (MCC) decision to build the station next to a school (Sekolah Tunas Bakti).

Students and inmates of Lambir Central Prison located nearby have had to endure the stench from the station daily since it was built in 2004.

“From what I can see, much improvement needs to be made, not only in terms of facility but also relocating the waste. I

notice a number of weaknesses, especially foul smelling leachate from unprocessed waste not disposed properly, causing strong odour as the leachate can seep into the ground,” he said.

Abdul Rahman has instructed the National Solid Waste Management Department Director General to plan a meeting with MCC to discuss the future of the station. He said it is better to find a solution rather than point fingers at certain parties.

“If it (station) stays here, we must ensure that the process is according to procedure so there is no unwanted and foul smell, and must also ensure better and more systematic management of leachate,” he said.

He thanked BN candidate for N.72 Lambir, Ripin Lamat for voicing out the problem and asked him to personally come and see the problems faced by residents there.

Abdul Rahman urged those affected by the station to be patient and hopes discussions between the ministry and MCC would yield results and solutions to the problem.