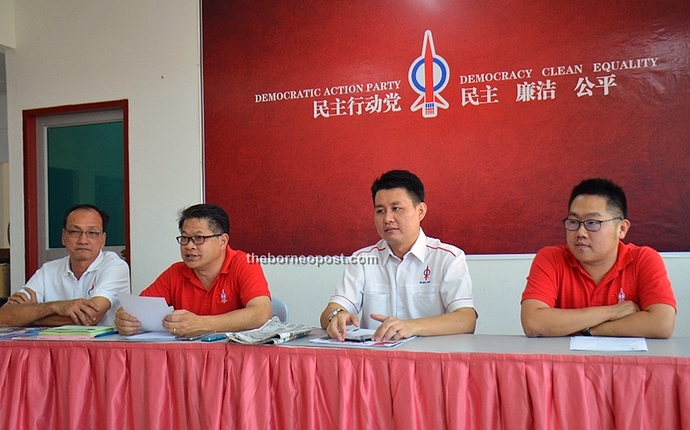 Dr Ting (second left) speaking to reporters during a press conference held at DAP Miri headquarters on Saturday (Aug 26) while Ling and other DAP members here look on.

“In the final minutes of the full council meeting on Friday, Councillor Ong Chee Yee made a statement that no one is to wear party logo shirts while attending council meetings, and surprisingly Mayor Adam Yii agreed and ended the meeting,” Dr Ting said during a press conference held at DAP Miri headquarters on Saturday (Aug 26).

Dr Ting added that following the statement made by Cr Ong, all other councillors and the deputy mayor were not given the chance to speak on the matter.

He emphasised that the undemocratic situation also shows that Yii is a leader who practices an autocratic style of leadership.

“The ad hoc statement by Cr Ong signifies another case of bullying tactic against DAP by the Miri City Council.

“I hope the mayor will take back the statement,” he added.

“A full council meeting is usually held on the last Monday of the month but for this month, the meeting has been changed to Friday and I do not think the public have been notified about this since it is still stated in their (MCC) website that the full council meeting will be held next Monday, Aug 28.

“This shows that they just do whatever they want. They can change it as they like, which is not fair to the public who may have decided to come to the full council meeting,” said Dr Ting.