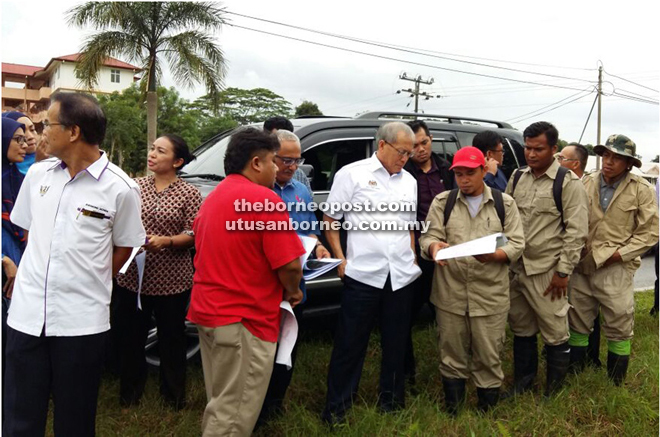 Riot (fourth right) being briefed by site officers on the progress of the ILP Serian project during the site visit.

Human Resources Minister Datuk Seri Richard Riot said the project, which is under the 11thh Malaysia Plan (11MP) and the first of its kind in this division, would sit on a 60-acre land along the Serian-Tangga Bypass.

“Graduates from ILP Serian should provide the boost by contributing to the expected demand of 35,000 skilled workers for SCORE,” he said after having conducted a site visit to the project yesterday.

Prior to that, Riot – who is Serian MP – attended a briefing on the progress at Serian District Office.

For admission to any present ILP – either in Kota Samarahan, Miri or the Advanced Technical Institute in Bintulu – students would need to pass their SPM examination, with at least distinction in three subjects including Bahasa Melayu.

The ministry continues to ensure that the quality of ILP graduates will not be compromised, despite the ‘relaxed’ entry requirements.

This is further reassured by the demand of local industries, which are constantly ‘headhunting’ ILP trainees even before their graduation.