Nanta officiates at Women Day do in Rh Jambun 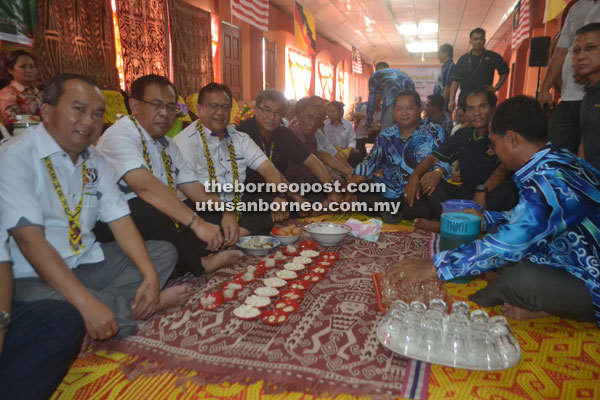 (From left) Elvis, Jamit, Nanta, Watan Awan (businessman), Nyalong, Pasang and Jambun are ready for a Miriing ceremony at the longhouse.

The organising chairperson was Datin Angelina Ujang (Nanta’s wife) who is the chairperson of P 125 Kapit Women and Family Council and was assisted by Nancy Kuyor (deputy chairperson) who is the wife of Bukit Goram assemblyman Jefferson Jamit Unyat.

Activities such as aerobic exercises, community programme like traditional game, colouring contests, handicraft, cooking, flower arrangement and karaoke competitions were among those held.

The events were held in conjunction with Women Day celebration.

It was also held to celebrate the appointment of Tuai Rumah Jambun who replaces TR Pasang Tubah who has been promoted to Penghulu since Sept 2015.

The JKKK of Rumah Jambun recently won second place at the national level ‘Anugerah Desa Sejahtera 1Malaysia’ for the Longhouse Category in 2015. It was organised by the Ministry of Rural and Regional Development.

The longhouse received a cash prize of RM50,000. The winner was Rumah Binal in Mukah which received RM150,000.

At the function, Nanta announced a government grant of RM20,500 to Rumah Jambun, a jetty and a retention wall for the waterfront.

Nanta handed over food packages to the needy courtesy of Department of Special Affairs (Jasa).

Angelina and Nancy later gave away prizes to winners of the various competitions.