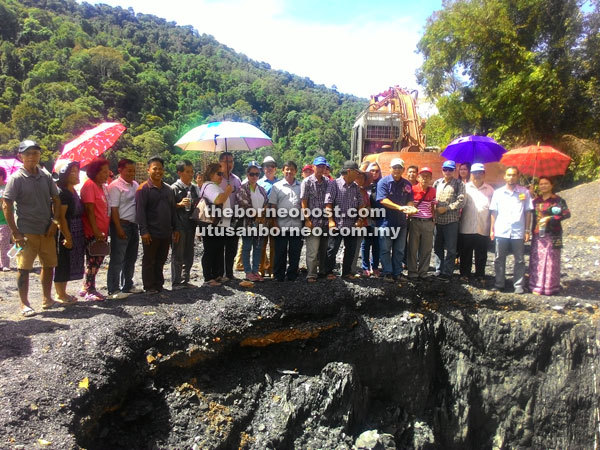 Ugak (sixth right) accompanied by Nanga Antawau folks at the earthbreaking ceremony for the telecommunication tower.

“The tower covers a radius of five kilometres. So not just longhouse folks of Nanga Antawau benefit but also SK Temenggong Koh, the clinic, agriculture station and folks of Nanga Sebiro down river. It benefits more than 1,000 rural folks here.

“Everybody, young or old, has a handphone. When they’re in town, they communicate with children and relatives working far away in Kuching, Sibu, Miri, Johor or Kuala Lumpur. However, upon return to Nanga Antawau, they’re deprived of the usage of handphones as there’s no service available,” said Ugak.

“My goal is for my constituency of P 216 Hulu Rajang comprising Baleh, Belaga and Murum to be fully covered by wireless telecommunications. Already there’s a telecommunication tower erected at Mujong and Sempili, Baleh River. This is one of my priorities, to narrow down the rural-urban digital divide and for rural folks to enjoy services provided by the government,” added Ugak.

Earlier upon his arrival, Ugak was given a traditional Iban warrior’s welcome.