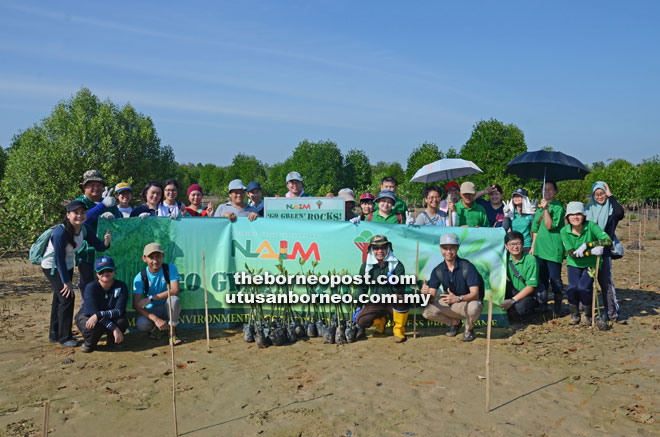 According to a press release, the activity formed part of the collaboration between Naim and the Forest Department Sarawak (FDS) for an environment conservation and awareness programme commencing in 2015.

According to Naim’s head of corporate communications, Caroline Yeo, the activity was in line with the Group’s commitment to its triple bottom line of ‘people, planet and profit’.

“We want to nurture a mindset among our staff of the importance of conserving the environment, and that it is everybody’s responsibility to do so for the sake of our generation and future generations. We planted about 300 saplings of ‘bakau kurap’ (mangrove),” she said.

“KWNP was one of the few Ramsar sites in the world and it was depleted due to the flood mitigation project in Kuching. Now, about 66,590 mangrove saplings have been replanted, covering 83.94 hectares.

“We understand that Naim has also embarked on various conservation activities in Miri and Bintulu, and we commend Naim’s efforts. We look forward to more such initiatives in time to come,” he said.

As the wetlands is an important sanctuary for some of the endangered species of wildlife and marine animals including proboscis monkeys, crocodiles and Irrawaddy dolphins, it’s important for everyone to preserve the wetlands.