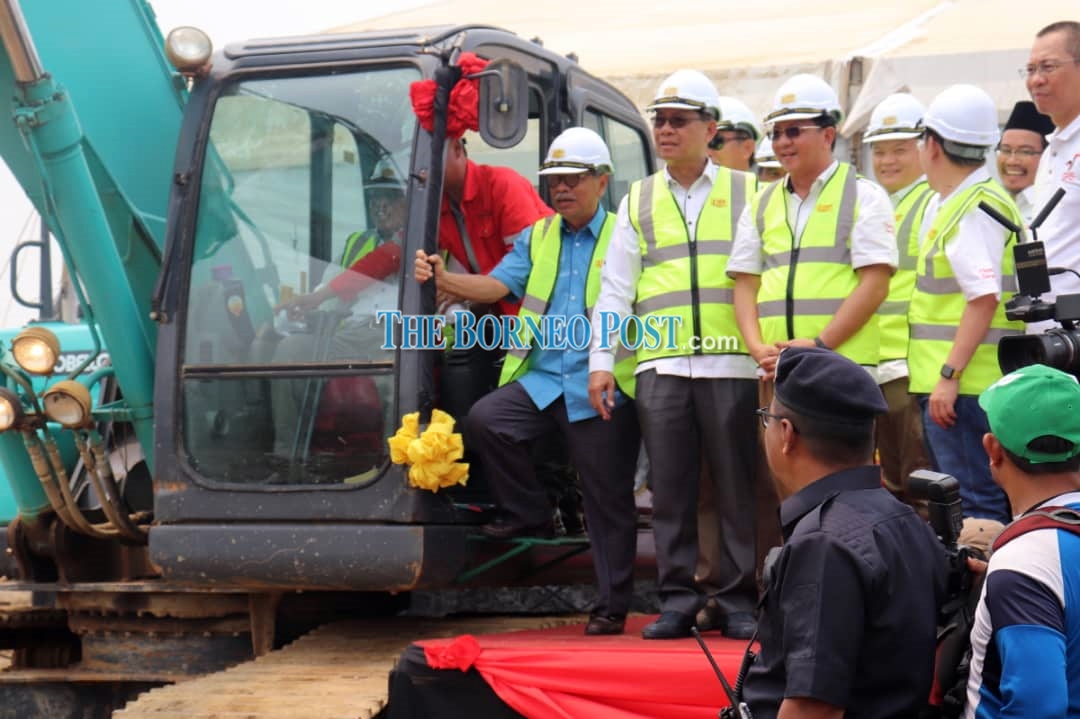 Abang Johari (inside the excavator) performs the groundbreaking of the Muara Lassa Bridge construction today. Also seen (from second left) are Masing Julaihi, Safiee and other distinguished guests.

Abang Johari said once completed, the 2.43-kilometre bridge would be the second longest in the state after Batang Lupar Bridge.

“The 2.43km long bridge costing nearly RM600 milion will take four years to complete. When completed, it will connect Daro to Pulau Bruit and other places by road,” he said during a press conference after performing groundbreaking of the Muara Lassa Bridge construction here today.

Earlier, when speaking before more than 7,000 people who attended the groundbreaking ceremony, Abang Johari recalled the promise to build the bridge was made when he visited Daro in 2017.

“When I came then, I just took over the helm of the state from the late chief minister Pehin Sri Adenan Satem.

“When I came back, I was asked if the project is doable because of the size of Muara Lassa river. But I am confident it can be done.”

He said the state could fund the construction of Muara Lassa Bridge by using the income generated from the imposition of tax on oil and gas (O&G) products.

“With people’s prayers when we formed our own party, the idea came to impose tax on our oil and gas products to get extra income for the state.”

Abang Johari noted that the state was expected to generate about RM3 billion income annually from the O&G tax which was introduced early this year.

“This is where the funds to build RM11 billion coastal road from Kuching to Miri came from. RM11 billion is not a small amount and I know from financing and economy aspects, it will take at least five to six years.

“Apart from our other sources of income, this RM3 billion annually is our extra income. In five years, we will get RM15 billion from the tax,” he said.