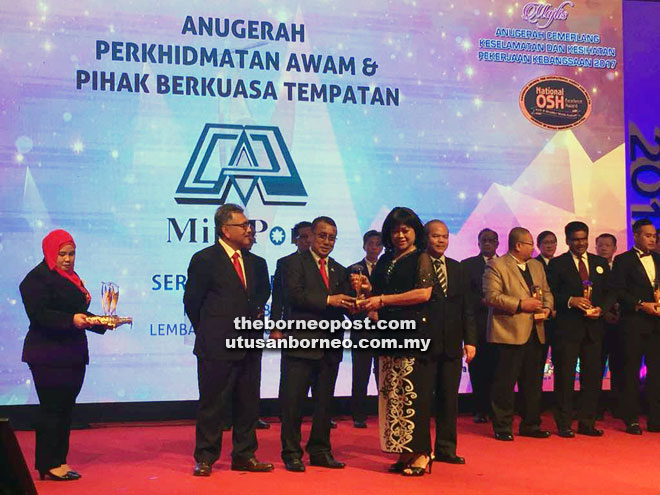 Serawa accepts the award on behalf of MPA from Ismail in Kuala Lumpur.

MIRI: Miri Port Authority (MPA) has brought pride to the state civil service after coming out tops in the Public Service and Local Authorities category of the National Occupational Safety and Health (OSH) Excellence Awards 2017 held in Kuala Lumpur recently.

According to MPA general manager Serawa Budol, it was the agency’s third consecutive win.

“Winning the award for the third consecutive time serves as an indication of our OSH system implementation and sustainability at Miri Port,” she said, adding that the award signified MPA’s commitment and holistic engagement in organisational excellence towards creating a safe and healthy working environment as well as providing value-for-money services to customers.

The initiative, she pointed out, was also in support of MPA’s mission and aspirations towards it becoming the ‘Port of Choice’ in terms of provision of diversified logistic services.

“Several initiatives have been formulated and implemented by the health and safety committees which comprise MPA’s management team and its employees, customers, contractors and related agencies. These are among the ingredients of the excellence system implementation of quality, occupational safety, health and environment (QOSHE),” she said.

The award was presented to MPA by the Deputy Minister of Human Resources Datuk Seri Ismail Abd Muttalib, who is also chairman of National Council for Occupational Safety.