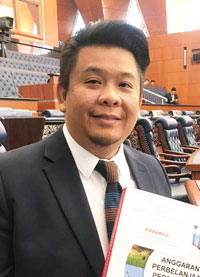 MIRI: The federal cabinet’s decision to bring down the voting age from 21 to 18 would make Malaysian youths feel that they are mature enough to be involved in politics.

In this regard, Sibuti MP Lukanisman Awang Sauni says by being able to vote at a younger age, youths would feel that they are included in the decision-making process and also have the choice when it comes to voting for a government that is concerned about their needs.

“Youths will feel more mature because they are given the right to choose for and determine their future, as well as the future of their nation,” he told The Borneo Post here.

However, the parliamentarian said the government must find the most viable means to ensure that all the eligible youths would register as voters by age 18 and practise this very right.

“Actually, I have suggested in the august House about the implementation of electronic voting.

“This is in line with today’s era of modern technology,” he said.

Lukanisman pointed out that with the lower voting age of 18, the youths could voice out their concerns, because they would have the right to either support government policies or go against them should

they feel that the policies were unfair or not good for them.

He said although some might feel that age 18 was too young for politics, and the youths might even become too vulnerable to some political influences.

“We do not want politicians to use schools as their platform to influence students, especially when they are invited to officiate at or attend school events and ceremonies.

“However, the government must find the most suitable initiatives to let school-leavers know their rights in choosing their government,” he said.

On another aspect, Lukanisman was confident that in the 15th general election (GE15), 18-year-old Malaysians should be able to practise their right as voters.

“Perhaps the government of the day needs to make several amendments to ensure that the national voting system is implemented with transparency and fairness.

“The next general election will definitely give new voters, especially the youths, an important experience, as for the first time they would join other Malaysians to choose the government that they feel is the best for the nation,” said Lukanisman further.