Motorcyclist crushed to death by lorry 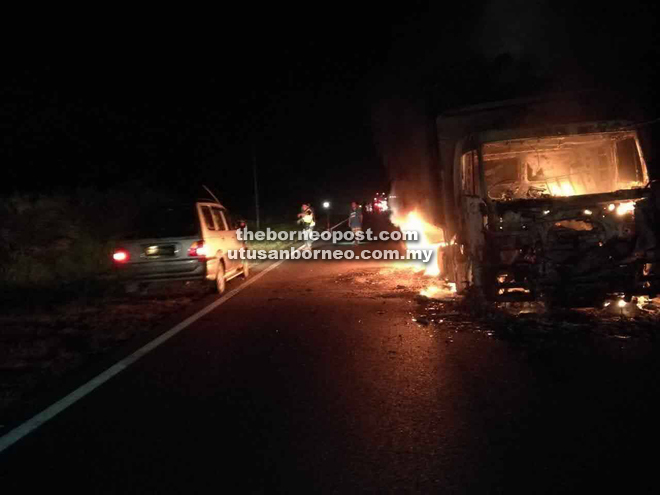 The burning lorry and motorcycle at the crash scene.

MIRI: A motorcyclist in his 40s was severly dismembered after being dragged more than 100 metres by a lorry laden with oil palm bunches near Ladang Tiga at KM75 Miri-Bintulu road about 9pm Wednesday.

It is reported that prior to the crash, the motorcyclist was riding alone to Batu Niah.

Police’s preliminary investigation revealed that the motorcyclist was overtaking the lorry and in so doing crashed with a car on the other lane, causing him to lose control of the machine and was thrown to the middle of the road. The lorry that he overtook earlier then ran over him.

The lorry driver said he could not brake in time to avoid running over him.

Due to the impact of the crash a massive explosion was heard. Both vehicles were burnt.

Two fire engines from Lopeng and Miri fire stations rushed to the scene after receiving a distress call to attend to the victim and put out the flame.

At press time, the identity of the deceased has yet to be identified.

The remains were sent to Miri Hospital for a post mortem while the investigation is underway.