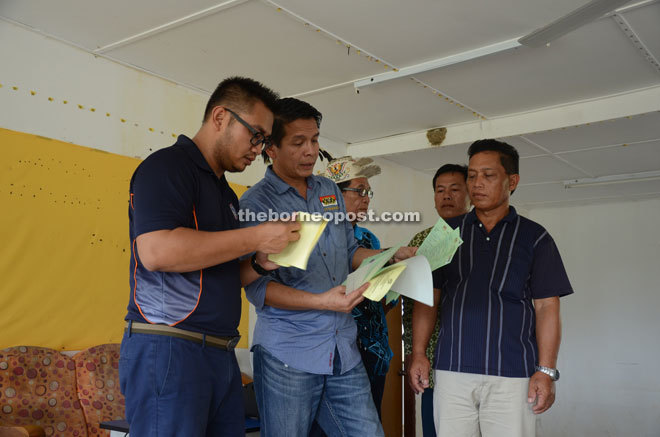 Affrizan (left) and Dennis verify the documents before handing them over to the applicants.

APAU NYARING, Baram: Miri branch of the National Registration Department through the Special Mobile Registration Unit has made it easy for the Penan community in the interior of Baram to apply for documents such as birth certificates and identity cards.

“Due to high cost incurred by the rural community to travel to Miri and Marudi, a mobile registration unit has been formed by the National Registration Department to facilitate applications,” Telang Usan assemblyman Dennis Ngau said at the presentation of birth certificates to 100 Penans in Apau Nyaring in the interior of Baram yesterday.

Most of them are not aware of the importance of registering births and getting these documents. In the past most of them were born in the kampong or settlement and the high cost of travel to Marudi and Miri discouraged them from applying, Dennis said.

Statistics from the National Registration Department revealed that 14,720 from the around 16,000 Penans in the state had been issued birth certificates and identity cards.

Rejection and delay in approval of birth certificates and identity cards among the Penan community are due to incomplete information.

“The National Registration Department will not be able to process the applications without information proving they are citizens of the country. Applications cannot be processed if the parents are also stateless or community leaders do not support their applications,” Affrizan said.

According to him, the unit intensified the exercise to the interior of Baram to facilitate application of these documents by the community.