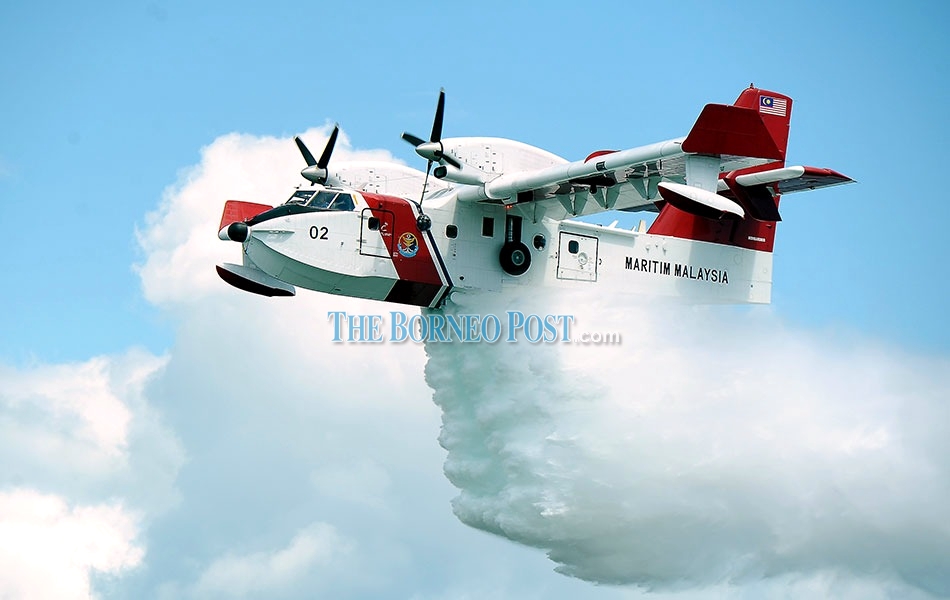 A photo of the MMEA’s CL-415 aircraft in action.

MMEA state director First Admiral (Maritime) Robert Teh Geok Chuan announced that the aircraft is expected to arrive in Miri at around 2am tomorrow from Subang airport.

“There will also be two flight crews to carry out two sorties for a duration of about four hours each on a daily basis,” Teh told a press conference held at the MMEA state headquarters today.

The operation which will be coordinated by MMEA Miri and Putrajaya is expected to last between eight to ten hours daily.

The aircraft is able to scoop and drop a total of 6,000 litres of water on a single run and is able to refill its load in about 12 seconds in a body of water, which includes the open sea, rivers or lakes.

When asked how many runs the aircraft will be conducting in Kuala Baram, Teh said it will depend on the location of the fire and its distance to the nearest water source.

Kuala Baram is however located near the sea, which could cut short the aircraft’s flight path on a single run thus contributing to the operation’s efficiency.

“We only received a request from the Sarawak government for MMEA to assist in combating the fire alongside the Fire and Rescue Department and other agencies today,” he added.