MMEA on the hunt for vessel’s captain 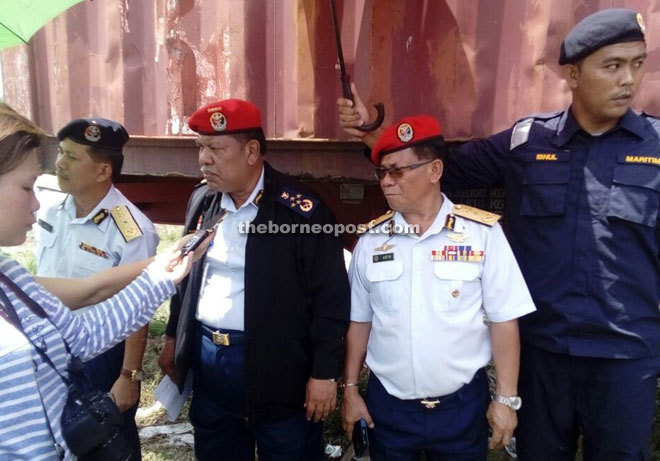 MIRI : The Malaysia Maritime Enforcement Agency (MMEA) and other related authorities are on the hunt for the captain of the vessel Ulticom 93, who is the main suspect in the smuggling of cigarettes worth RM33 million, the biggest amount ever recorded by the agency so far.

MMEA director-general Admiral Datuk Ahmad Puzi Ab Kahar said the man, a 42 year old local, had managed to escape from the vessel and left behind three boat crews from Myanmar.

The foreigners together with six containers of cigarettes of various brands, or 27 million sticks of cigarettes, were detained during a special operation by a maritime special task force (Star Team) on July 21 last year at a location 3.5 nautical miles from Miri River mouth.

“We are tracking down the boat captain who managed to escape and who is also the main suspect in this biggest cigarette smuggling case ever recorded by MMEA. Anyone who knows the whereabouts of the suspect can inform MMEA immediately, as we have published this in the media before,” he said.

Speaking to reporters after witnessing the disposal of the seized cigarettes at Miri City Council (MCC) sanitary landfield in Kuala Baram yesterday, Ahmad Puzi said the foreign boat crews had been deported to their country of origin according to legal procedure.

“They were just workers who were instructed to carry the goods,” he said adding that the seizure made last year was the biggest cigarette smuggling case ever recorded by MMEA.

“There are several other cigarette smuggling cases, there are those amounting to RM1 million, there are also cases up to RM5 million in one month, but this is worth RM33 million in just one case, making it the biggest seizure ever made by MMEA,” he said.

He was also satisfied with the support of locals here who had helped provide information that led to the seizure, as well as collaborations from other government agencies and departments such as the police, customs and local authorities.

Ahmad Puzi said MMEA would try its best to improve their effort in combating illegal smuggling, not only involving cigarettes but also other taxable goods.

“We welcome the people here to provide any information related to smuggling, in or out, of any duty free items, especially items which are the people’s basic needs, so that we can avoid loss in government revenue and loss to the people,” he said.

“We dug a 15 feet deep hole, put all the cigarettes inside it and fill it with water to ensure that they are fully destroyed before burying them. This is to ensure that it will not be dug up by irresponsible people. We also had authorities in uniform witnessing the whole process,” he said.

The whole procedure was carried out with help from Bomba Miri.

MMEA officers as well as representatives of other local government agencies involved.

Well, I didn’t get to migrate the old topic in the old forum… so going to redo it here. This is a comic I made using Halftone 2, iPhone 6+ and my kids toys. Hopefully when my kids see them, they will learn to love their toys a little bit more and not leave them laying all on the floor or scattered all around the house. Anyway, the comic is loosely based on the life & events in and around Miri. In other words, a comical reflection of Miri just for entertainment purposes. If you’re into this …