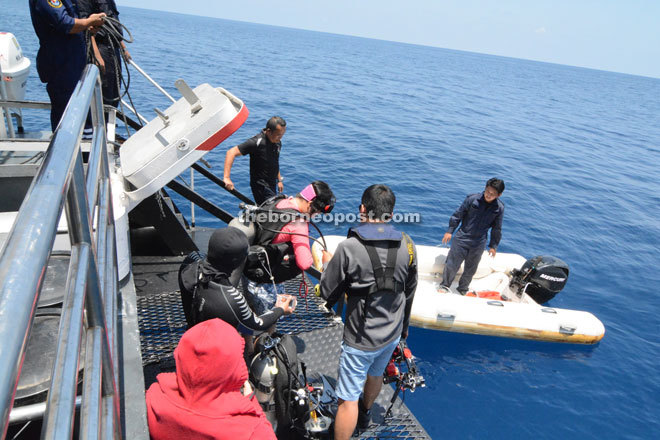 Media personnel and divers getting off from an MMEA vessel to board a smaller raft, which transported them to Beting Patinggi Ali.

Sarawak maritime chief First Admiral Ismaili Bujang Pit said by gazetting it as a marine national park, the area will be fully protected and safer.

“Apart from that, we can also bring in tourists here for recreational activities such as diving, fishing and snorkelling in a more protected and safer environment,” he said.

Beting Patinggi Ali in Luconia Shoals, which is home to various species of beautiful coral reefs and a breeding area for marine lives in Miri, needs to be protected from irresponsible parties to ensure that the coral reefs there continue to grow and breed.

Speaking to reporters during a media visit to Beting Patinggi Ali last Saturday, Ismaili expressed confidence that Beting Patinggi Ali, which is about 84 nautical miles from Miri, will become a great tourism attraction if it is gazetted.

During the one-day programme, members of the media were introduced to the tourism potential in Luconia Shoals, which has become a popular and safe spot among divers as well as snorkelling and fishing enthusiasts.

Reporters were also given the opportunity to dive and snorkel around the area.

Members of the media were also brought to Beting Hempasan Banting, which is the most popular area in Beting Patinggi Ali reef clusters.

“It is a safe place and you can personally witness that today (last Saturday), you can easily dive and carry out snorkelling, in fact the sea is also calm and peaceful without any illegal vessel encroaching in this area.

“You can also see MMEA vessels (two) which are put on standby to monitor this area, to ensure no encroachment in this area (Beting Patinggi Ali), which is within the nation’s Exclusive Economic Zone (EEZ),” he said.

“Therefore, MMEA is planning to carry out more such activity (fishing tournament) and we thank STB and MAC for helping to organise this first fishing tournament with MMEA, and through such collaboration we will make the shoals popular,” he added.

Some 10 personnel from both electronic and print media as well as divers took part in the media trip organised by MMEA to introduce and popularise Beting Patinggi Ali.

Meanwhile, 52 participants who took part in the fishing tournament in Luconia Shoals returned to Miri with their catch yesterday, after spending three days at the location.