By now, you probably wont be surprised to hear that Mitusbishi Motors Malaysia (MMM) is a busy company for 2010 with a trio of new models for the Malaysian market. The legendary Pajero will be the first to debut later this month, and theyve announced that the ASX compact crossover will be here in the fourth quarter, so heres the last piece of the jigsaw the Lancer Sportback that was recently snapped by some of you.

Launched in 2007, the Lancer sedan has very done well in Malaysia for a product out of the Toyota/Honda/Nissan triumvirate. Malaysian carbuyers are generally a distrusting lot, so our acceptance of the Lancer can be due to two main factors the pent up desire for a real Lancer and the ninth-generation cars hot looks.

Continue reading the report after the jump.

I still remember clearly when I first drove the Lancer GT the weekend after it was launched. Never in my hands before had a test car, including more exotic/expensive ones, turned so many necks and caught so much attention. Never mind that its just a humble C-segment saloon battling the Civic and Altis, the Lancer looked every bit the Fantastic Sports Machine it was touted to be and everywhere we went, there were people asking Evo ah?

Few years have passed, and while the Lancer doesnt get so many stares these days due to familarity, its still a very handsome car one that proclaims performance from the design alone, and still the sportiest looking entrant in the class to these eyes (were talking about the GT variant, of course).

Now that Ive professed my admiration for the sedans looks, Id have to say that I dont fully get the Sportbacks design. While Im quite fond of hatchbacks, I dont see much allure in the Sportbacks shape. In searching for a reason why, I looked up the side profile pics of current five-door hatchbacks that were drawn ground up, cars like the Subaru Impreza and Hyundai i30 for instance (the likes of Focus and Golf already have their trademark shapes), to compare side-by-side with the Mitsubishi.

From this, I realised that it was down to the Sportbacks long overhangs and heavy rear end. The former is not an issue in the sedan, but most modern hatchbacks have their wheels closer to the edges. The elongated rear section (demonstrated by the angle of the rear glass) also contributes to the impression of an ample bum. Furthermore, the more rounded rear edges dont really go well with the sharp front end.

Think about it. Sedans converted from hatchbacks are normally critisised for being poorly proportioned, so crafting a hatchback out of a sedan shouldnt be that straighforward either, and Im sure there were constraints Mitsubishi desginers have to work within. To these eyes, the end result looks more utility (SUV, wagon) than sporty, but of course looks are subjective and there will be many who like it.

In any case, the rear spoiler helps the cause. Everything forward of the B-pillar is familiar. You might have noticed that the Sportback pictured here comes with the split grille of the Lancer EX (but only the upper half has a chrome outline, EX has chrome on both tiers) instead of the full jet fighter grille of the Lancer GT, and Malaysian bound cars will be similar. Most 2010 cars in other markets come with the sportier item, but perhaps MMM wanted to create some differentiation from the sedans.

From the drivers seat, whats good and bad about the Lancer sedan is applicable. Lets start with the positives. Mitsubishis C-segment machine was conceived with a sporty flavour, and all thats essential and central to the business of driving is spot on here. The sporty twin barrelled dials are easy to read and look good; ditto the leather wrapped three-spoke steering wheel, which like the Lancer EX has buttons on both sides (audio left, cruise control right). The leather seats on our JDM spec test car were comfortable and reasonably supportive when cornering, and a good driving position wasnt hard to find, for me at least.

But the masterpiece has to be those magnesium shift paddles that wouldnt look out of place in a supercar, the exact same items youll find in the sedan. The ting-ting sound it makes when meeting your fingernails is great, and the action is substantial, unlike the toy like tactility of some plastic shifters. Theyre mounted on the steering column, not the wheel itself, so those whose driving style involves twirling the wheel in corners with hands maintained at 10-2 wont have to adapt. For the rest whose hands turn with the wheel, shift before you turn!

Thats the great stuff. Away from the drivers area, the dash design is as unimaginative as Mitsubishi could have got theres little to excite or interest unlike the Civic and Mazda3. Weve also complained about the grade of material in the Lancer since day one, and the same hard and insubstantial feeling plastics covers the dash and door caps. Panel fit isnt the most consistent either and those knobs on the stereo are toy like. But it looks like these arent deal breakers, judging by how the Lancer is still well received.

Equipment wise, expect the local Sportback to have whats on the Lancer GT, which includes dual airbags, ABS/EBD/BA, auto air-con, 6-CD/MP3 player, a black themed interior with leather on seats, steering and gearknob. It should also come with cruise control, but were not sure if keyless entry and a touch screen ICE system with navigation (as per Lancer EX) is part of the package. But whats certain is that the Sportback will come with Active Stability Control with Traction Control, a safety feature none of the sedans have.

Another one up over the current Lancer is under the hood. The Sportback will be powered by a 2.4-litre four-cylinder engine with 16 valves, DOHC and MIVEC on intake and exhaust valves. Not to be confused with the old 2.4 unit in the Grandis, this is actually the 4B12 thats a longer stroke version of the 4B11 2.0-litre unit in the Lancer GT/EX. It makes 170 PS (at 6,000 rpm) and 226 Nm (at 4,100 rpm), which is 15 PS and 27 Nm more than the 4B11. And although we got to experience the manual in Japan, there will not be a stick shift for Malaysia and our sole option is a CVT with six-speed manual mode, something current Lancer owners are familiar with.

With a 2.4, the Sportback is the biggest engined and most powerful Japanese C-segment car in our market, as the rest top out at two litres. In our short test drive at MMCs Tokachi proving ground, I did feel a difference compared to my memory of 2.0-litre Lancers, especially when pulling away from low revs, although the variance is not night and day. The power spread is also decent, and the engine is keen to rev. The 4B12 employs a balancer shaft module to aid smoothness; and while its less tiring and woeful sounding than the 4B11, I believe that smoothness isnt an inherent quality of this particular engine family.

Theres nothing new to report on the CVT. Sounds and feels a bit lazy at low speeds, but shifts happen fast in manual mode, which I use quite frequently when driving a Lancer. At Tokachi, we were fortunate to sample the Sportback with a manual box, and the experience was much more fun just by putting the responsibility of shifting gears back into your hands and left foot. Were not talking about Honda levels of slickness, but its good enough. Unlike the CVT, a stick shift doesnt add tedium to the uninspiring engine note, but instead takes some attention away from it. Too bad.

That aside, the ninth gen Lancer has always been above par in the driving department, and the Sportback follows form. It rides very well on 18-inch rims and body control is taut for a non-performance variant. Its nice to steer too; the leather wrapped wheel has nice weighting and theres quite a bit of road feel filtered through. The Lancer hasnt gone on the EPS wagon by the way it still uses good old hydraulic power assist. Grip is good, too.

Many Malaysian carbuyers have the impression that buying a hatchback is like getting less car than a sedan, but its not so for the Sportback, literally. It actually has a larger footprint than the sedan thanks to 15 mm extra length (4,585 mm) although width and the 2,635 mm wheelbase are unchanged. Rear room is similar to the sedan, which means not bad, but not as much legroom as a Civic though. All black interiors dont do much for an impression of space, but there are no headroom issues in this hatchback.

There are some surprises in the boot, where Mitsubishi incorporated some MPV style conveniences which are helpful in daily use. The seats split fold 60:40 to increase load space, but instead of stretching to fold them, the Sportback has levers on both sides of the boot wall just pull and they fall.

The boot also has a false floor that can submerge by 90 mm for a deeper overall space. Sliding the floor into the lower groove is a one handed operation. The 345-litre boot is square shaped (good) and the hatch opening is large. Although overall boot capacity is smaller than the sedan, theres more possibilities for large items when the seats are folded.

If you want a Lancer that stands out from the rest, and like the looks of the Sportback, this should be right up your alley. Theres no sacrifice in cabin space compared to the sedan, and you actually gain in hatchback practicality and power. What about the all important price? Although MMM hasnt finalised the figure, my guess is that this CBU import from Japan will be priced below the RM140K mark a small premium over the Civic 2.0 and Mazda3 2.0 Sedan. It should be launched sometime in October, so stay tuned! 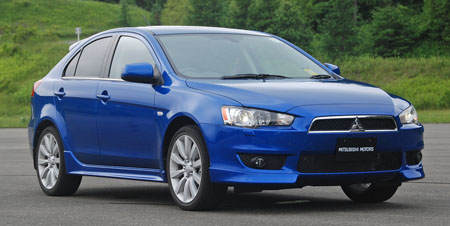 UPDATE: Mitsubishi Lancer Sportback 2.4 launched in Malaysia - RM129,363.00 By now, you probably won't be surprised to hear that Mitusbishi Motors

Mitsui’s car are getting uglier day by day.

agree with u…
Last time,design is more attractive and sporty…
Now,the facelift is the same,just redesign and walla!it become hatchback…

Mitsui’s car are getting uglier day by day.

lol… why suddenly the hatchback season? come to think of it i think Gen2 looks nicer than any of those hatchback…