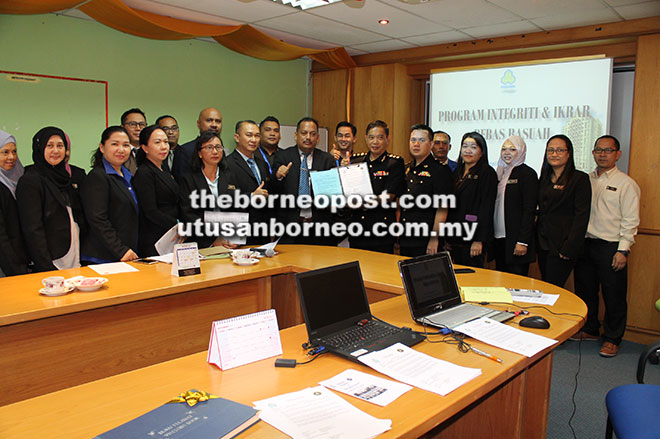 Othman (sixth right) hands over IBR pledge to Hendera while others look on.

Hendera said the initiative was taken to instill integrity and transparency among the staff.

“Socso views corruption seriously and the swearing of the pledge is a reminder to everyone to carry out their duties responsibly and with more integrity,” he told reporters yesterday.

Hendera hoped all Socso staff would reject all forms of corruption or abuse of power, and work together with MACC in preventing corruption.

Othman also spoke. He said corruption could occur at any time and the pledge made by Socso staff here showed their high commitment to combat corruption.

“I hope every word uttered in the pledge can be fulfilled by every Socso staff,” he said.

He added that IBR is unique and different from the Corporate Integrity Pledge as it emphasises pledges and promises made by everyone in an organisation no matter their ranks.

“IBR is only implemented this year and the aim is to uphold staff responsibility and accountability to avoid being involved in any corrupt practices, malpractices or abuse of power when carrying out their duties,” he said.

Socso Miri is the fourth agency here to pledge the IBR after Miri City Council (MCC) police and the Transport Association under the Ministry of Domestic Trade, Cooperatives and Consumerism Miri.