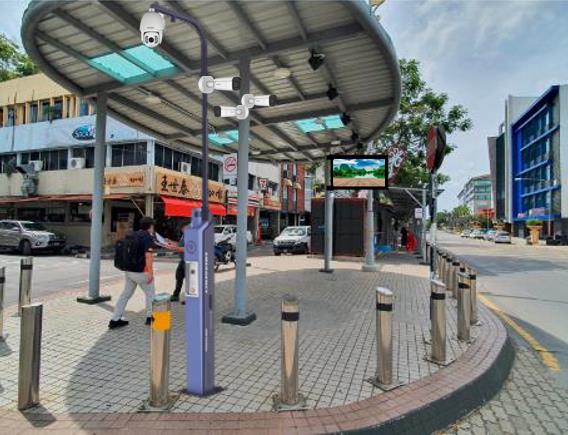 An image provided by MCC which shows where the proposed CCTV and digital screens will be located at the city’s Wireless Walk.

MIRI: The construction of Miri’s Smart City infrastructure has commenced on June 19 at its Wireless Walk, Handicraft Center, Taman Bulatan and City Fan, and is targeted for completion at the end of September this year.

Advising the public to be cautious when they are in the construction areas, Miri City Council (MCC) chairman Adam Yii said there are nine programmes being rolled out under the Miri Smart City Proof of Concept project.

During the construction period, Yii said concrete mounting plinths and platforms would be built in preparation for the erection of steel structures and poles for the mounting of CCTV cameras, digital signage screens, and communication facilities.

Conduits, he said, would also be laid out along the curbs of the streets and pathways in the parks to enable the laying of cable, and road crossing if unavoidable, would be minimized and handled with extra precautions.

“MCC will not compromise public safety and convenience for speedy delivery of the infrastructure solutions. Contractors have been briefed and reminded to observe good construction practices, and avoid works during peak hours to minimize inconvenience to the public.

“Meanwhile, the public are urged to be cautious and practice vigilance while they are at or passing the aforementioned areas,” he said in a statement.

Yii revealed that the Smart Bus and Smart Truck were software solutions to improve the city’s bus transportation services, and the garbage collection efficiency, respectively.

Smart Tourism, he added, was one of MCC’s efforts to boost the development of Miri as a resort city.

Yii, meanwhile, said he was very concerned with the high rate of vandalism in the city, which cost MCC millions of ringgit to rectify every year.

He urged the public to take ownership and good care of public facilities, including those currently being implemented, and to report to MCC if any attempts of vandalisms of public properties are observed.

“Mirian should attune their mindset to the infrastructural growth of the city, and with their active participation, Miri can be a truly Smart City,” Yii said.

The government has allocated RM9.5 million for the Smart City initiative.