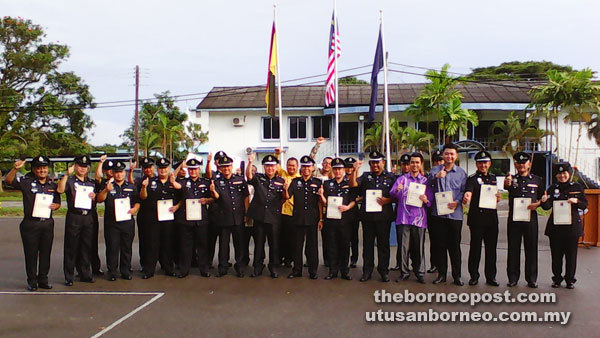 Khoo (seventh left), Stanley (sixth left) and others give the thumbs-up after the certificate presentation.

MIRI: The police here have opened 1,377 cases in the first 10 months of this year.

From the number (1,377), 549 cases or 40 per cent have been successfully charged in the court, the city police chief, ACP Khoo Leng Huat, revealed during a monthly assembly held at police headquarters here yesterday.

It was Khoo’s first appearance at the monthly assembly since taking over as the new city police chief from ACP Junaidi Bujang on Oct 5.

“Our success rate (40 per cent) has surpassed the state’s target of 35 per cent,” Khoo said.

Besides the high commitment given by his officers in delivering their crime prevention work, Khoo also credited members of the public for their cooperation in increasing their Key Performance Indicator (KPI).

The trio, during a routine patrol at Pujut 3B neighbourhood on Nov 5, managed to foil a house-breaking attempt.

Their bravely led to the arrest of a suspect.

Khoo said: “To tackle crimes effectively, we need to involve the public, which I believe can lead to greater trust in crime prevention efforts.”

He also thanked the media in helping the force(police) to tackle crime.

“The media is a tool used to engage the public in crime prevention,” he said.