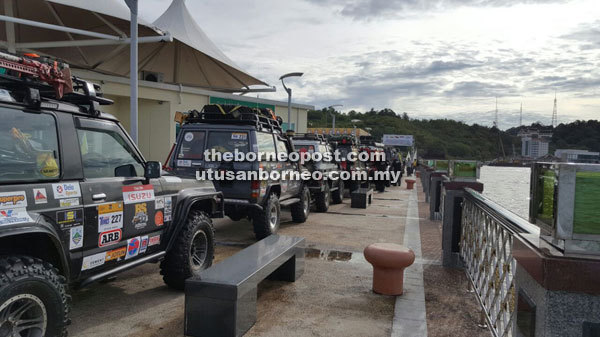 A line of 4WDs line up to the grand stand for the start of the 26th Borneo Safari OffroadChallenge 2016.

MIRI: Members of the Oil Town Adventure Club Miri are taking part in the 26th Borneo Safari International Offroad Challenge at Kota Kinabalu in Sabah, which kicks off today and ends Nov 6.

In May, they joined an offroad expedition at Danum Valley in Sabah with other participants from Brunei and Sabah.

According to Robert, this is his second trip to Sabah and he loves the natural beauty of the forest, apart from experiencing the challenges of the expedition and meeting more friends.

“It is nice to join the Borneo Safari – it gives me a fascinating view of the natural forest and the friendly people whom we will meet along the journey,” he told The Borneo Post when contacted yesterday.

According to Robert, who works for an oil and gas company here, the challenging route is ‘an invaluable mileage of experience’ for the participants.

He said along the route, the convoy would pass many intriguing locations and villages including the remote areas.

His travel-mate Ahem said various techniques and aspects in operating four-wheel-drive vehicles (4WDs) would come in handy for the extreme sport participants.

He said the safari would involve various makes of 4WDs from Brunei, Indonesia, Sarawak and Sabah.

According to him, 340 participants are taking part in this year’s tour.

“It’s a family gathering of sort for extreme 4WD enthusiasts from all walks of life to enjoy the beauty of Sabah,” he

Of the total, 34 4WDs are from the Four Wheel Drive Association of Brunei.