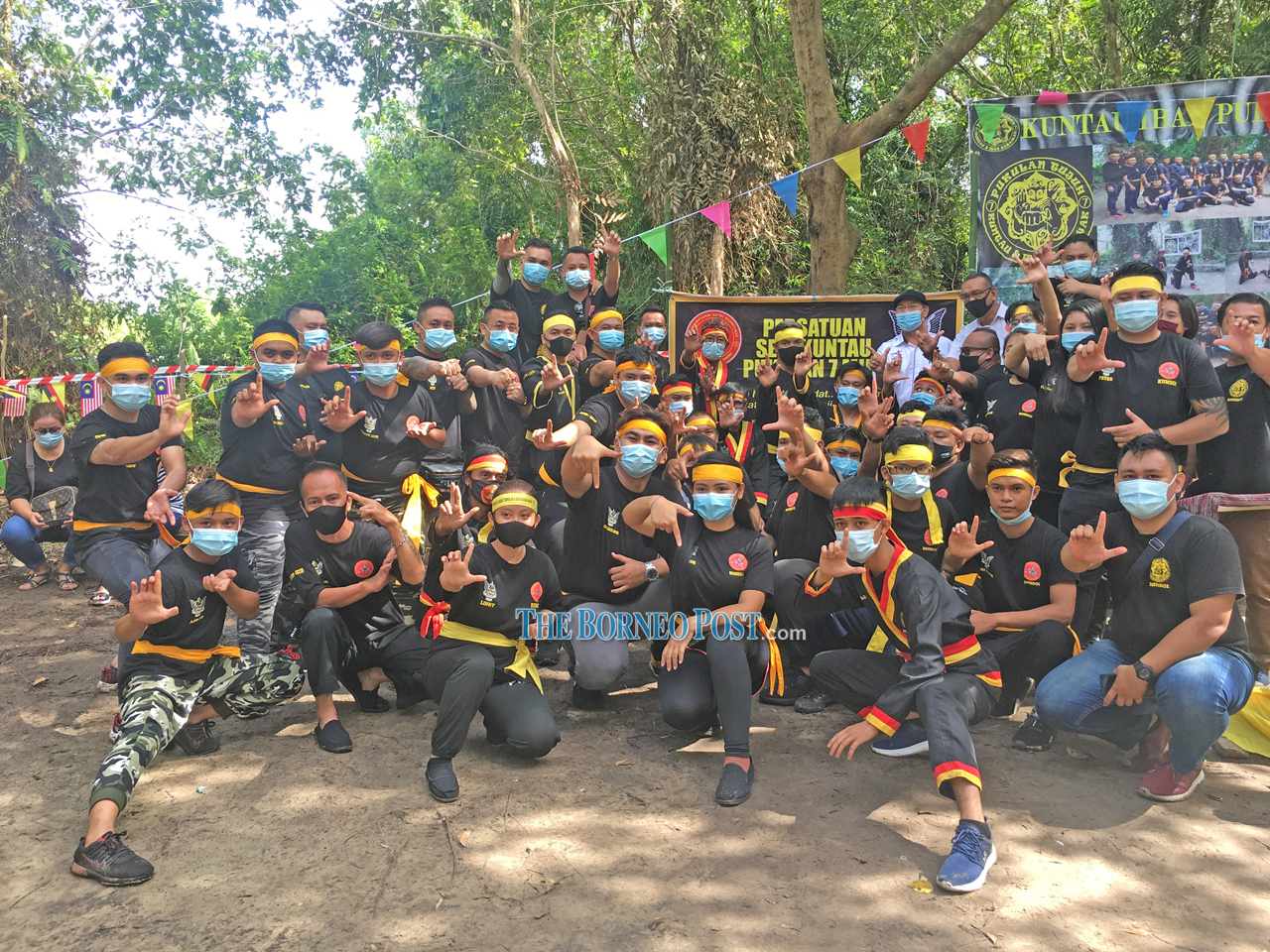 Gerawat (backmost row, third right in front of banner) joins members of KP7M in a group photo at the ‘kelang’ (kuntau training court) in Kampung Tulang.

MIRI: The Pukulan 7 Miri Kuntau Association (KP7M), which aims to uphold and preserve the Iban traditional martial art, is now a Registrar of Societies (ROS)-approved body.

A special ceremony to mark its ROS registration was held at the Kelang Kampung Tulang in Lutong yesterday, where Mulu assemblyman Dato Gerawat Gala officiated at the event.

In his remarks, Gerawat congratulated KP7M members for their success in getting the association registered with RoS on July 2 this years. It is reported that the association now has over 200 members.

“I’m very interested because this is an association that promotes our Dayak tradition and culture in Sarawak. I really welcome this because ‘kuntau’ is a tradition or an identity of the Dayaks.

“Despite many of us having migrated to the cities from longhouses, our tradition continues to be promoted and practised – this is our heritage; this is what us Dayaks are known for,” he said.

Gerawat also pointed out that kuntau, like any other self-defence arts, aimed to instil in every practitioner self-discipline, decorum and healthy living.

“You have to be very fit to be involved in such an activity – this is why the government really encourages it, in that it promotes healthy living and is able to produce highly-disciplined individuals who would ensure that our state would continue enjoying more developments in the future,” he added.

On a request submitted by Mathew for the Sarawak government to provide a piece of land where KP7M could conduct its activities, Gerawat said he would discuss the matter with Miri mayor Adam Yii.

“I would get in touch with Miri City Council and Mayor Adam Yii on the provision of a space for the association to conduct its activities in a more comfortable environment.

“I will also get in touch with my ‘YB’ (elected representative) friends here, including (Transport Minister and Senadin assemblyman) Datuk Lee Kim Shin and (Assistant Minister of Tourism, Arts and Culture; and Piasau assemblyman) Datuk Sebastian Ting to look for ways to help the association.

“I also want to see how the activities of the association develop. If such development is growing, then you are bringing more impact to our community in Miri; thus, we will continue to support this association,” he added.

Later at the event, Gerawat announced a grant of RM7,000 for KP7M.