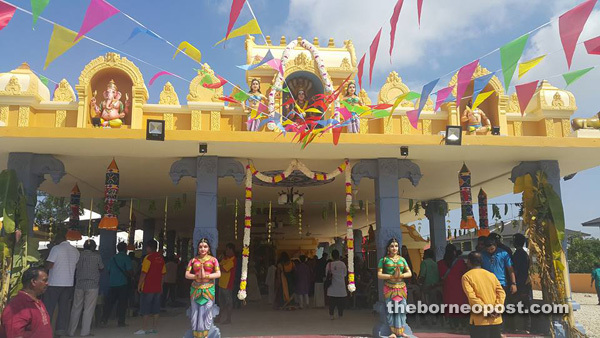 MIRI: Locals of Hindu faith are very happy that they now have a proper temple to perform prayers and hold ceremonies for this year’s Deepavali.

The ‘Sri Kamini Durga Eswari’ temple opposite a Chinese temple at Taman Tunku here was officially declared open on July 10 this year.

According to Miri Hindu Society (MHS) president Selvaraj Grapragasem, the temple is open daily – not only during festive celebrations as many people think.

“We have two prayer sessions every day – one from 6am to 10am and the other, from 7pm to 9.30pm,” he told The Borneo Post yesterday.

He said prior to Sri Kamini Durga Eswari temple, the local Hindus had to ‘squat’ on top the four-storey Raghavan building – an open space with a zinc roof that had no basic amenities such as toilets or kitchen – during religious ceremonies or festive celebrations.

The opening of the new temple coincided with the ‘Nine Nights’ celebration of the Hindus, which ran from Oct 1 to 10.

Former Miri Hospital director Dr Uma Devi was among the devotees who took part in the activities of the festival, which also engaged volunteers from non-Hindu organisations.

Society of Healthy Ageing in Miri (Soham) pro tem secretary Jennie Soh was among the Chinese Buddhists from Krokop who came to offer their help and service throughout the 10-day holy celebration.

“It is a good opportunity to be able to witness this auspicious, glorious and colourful holy ritual, and also understand it better.

“It is also a good tourism attraction in Miri,” Soh said.

According to Selvaraj, it is estimated that there are around 1,000 Hindus here, comprising locals and expatriates who are engaged in the oil and gas industry, as well as those in the education and medical fields.

“There are also Hindus from Brunei who come to the temple for worship every weekend,” added Selvaraj. 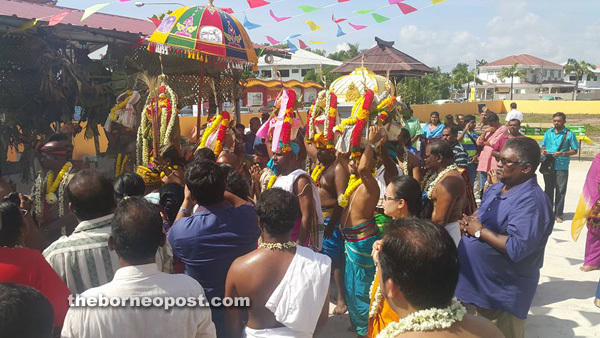 Devotees bring gifts and offerings to the temple for the ‘Nine Nights’ celebration.