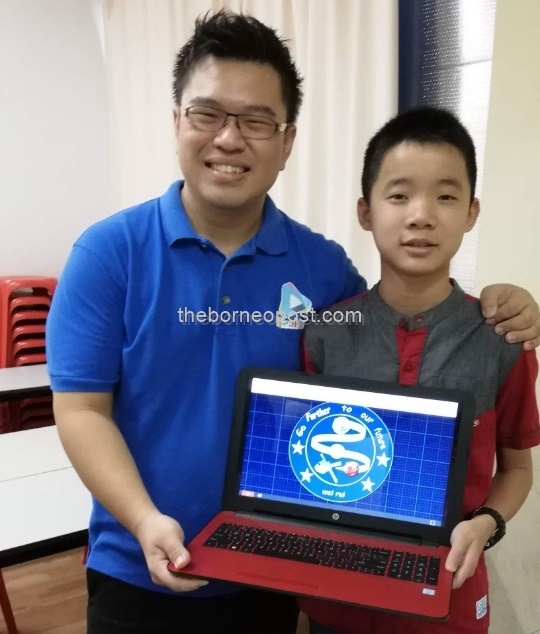 MIRI: A 13-year-old Miri boy from Pei Min Secondary School has earned the recognition of America’s National Aeronautics and Space Administration (NASA) after being selected as one of the five winners of the prestigious NASA mission patch design competition, and earning a video conference session with a NASA expert this Friday.

There were about 10 thousand designs submitted, and only five were selected by NASA, including three from the United States, one from Sri Lanka and one from Malaysia.

“We are very proud to say that a 13 year-old-boy from Miri, Sarawak is one of that five. It is a proud moment for us Mirians, Sarawakians and Malaysians to celebrate with,” said trainer Teo Yuang Teck from Realfun Learning Centre, a certified Blue Ribbon Educator by Tynker at SMA-TEGAS Digital Innovation Hub in Miri Time Square.

According to Teo, Teng only joined the coding class in October last year and it was great to see this achievement in such short period of time.

“It’s a dream come true, empowering children to make an impact to the world even when we are living in Miri. I hope more children will follow his footsteps and learn how to create things and applications themselves and put their name in the world,” said Teo.

As part of the award for winning the competition, the student and teachers would have the honour of having a video conference call with a top NASA scientist Dr Jitendra Joshi at around 7:30pm this Friday at SMA-TEGAS Digital Innovation Hub, here.

Jitendra, who is the integration lead for Advanced Exploration Systems and handles technology development in life support and habitation for several flight experiments, would be talking to them from US.

Besides being a winner of the prestigious Silver Snoopy Award, Jitendra is also an active volunteer in children’s sports and served as the President of Vienna American Little League for seven years.