Minute of silence for Adenan at CNY event 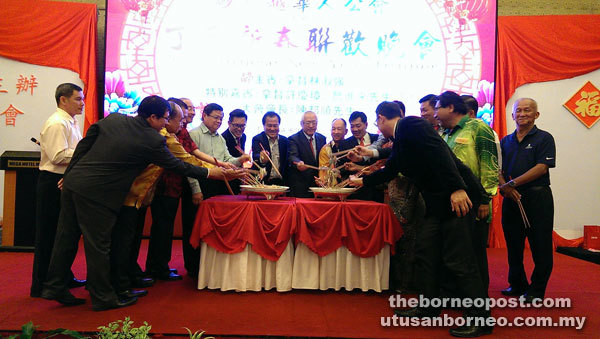 Hii (seventh left) and Ling (on Hii’s left) together with others tossing ‘yee sang’ during the dinner.

About 700 guests who attended the dinner observed the moment of silence to show their respects to the late Adenan, recognising him for his great leadership for the state.

The event was officiated at by Datuk James Ling who is the association’s permanent honorary advisor.

In his address, Ling called on people of various races to safeguard and treasure the existing harmony in the state at all costs.

“Our differences notwithstanding, it is already a traditional practice in the state for us to celebrate any festive season together in a harmonious atmosphere.

“I would like to congratulate the Sarawak Chinese Association for subscribing to such a noble spirit in this CNY dinner event. Thus, I regard this as a highly valuable symbol because this gathering has surpassed racial, lingual and cultural differences.”

In view of this, he was in favour of more such events to be organised frequently which indirectly helps in promoting good relationships between the various communities.

“When the various races get together frequently, we not only promote our relationships, the mistrust between each other will also be easily dissolved, thus decreasing our misunderstandings and conflicts.”

At the same time, he praised the Sarawak Chinese Association for its initiative to participate in charity service by organising cultural and educational activities to help the poor and needy.

Apart from that, he also noted that the association has done a good job to promote moral excellence.