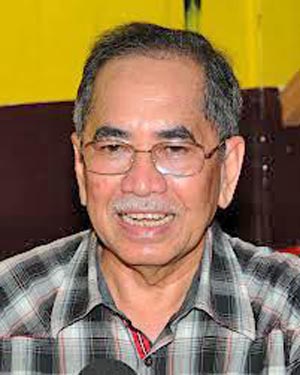 He said the nation had lost ‘another warrior’, and such loss was not only felt by Ngalinuh’s family, but also by ‘surviving comrades-in-arms who had served alongside the hero’.

“I would like to extend my condolences to the family of the late Sub-Insp (Rtd) Ngalinuh Bala @ Kilah Ratu who passed away (on Tuesday, June 23) due to lung complications in Miri Hospital.

“The nation’s highest gallantry award was presented to him as a gesture of honour and recognition for his courage in defeating the communists during an ambush by the enemy at Jalan Ulu Oya, Sibu on April 29, 1972,” he said in a statement yesterday.

Wan Junaidi, who is Santubong MP, said he had the privilege of serving alongside Ngalinuh in the Police Field Force at Riam Camp in Miri.

His retired as a sub-inspector at Miri District police headquarters on Dec 31, 1995.

The post Minister regards having served alongside Ngalinuh in Police Field Force a ‘privilege’ appeared first on Borneo Post Online.