Meet cast of ‘The Prodigal Son’ during promo 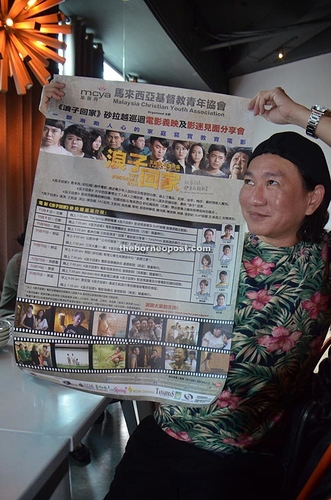 Film director of ‘The Prodigal Son’, Bjarne Wong, holding a poster for the Sarawak tour programme. 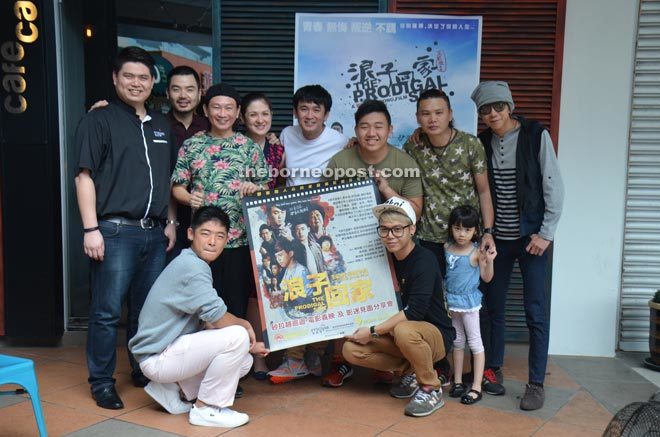 Wong (back, third left) with the cast of the movie ‘The Prodigal Son’. Also seen are representative from Malaysia Christian Youth Association Kelvin Tiong (back, left), and co-owners of Café Café restaurant Peter Tiong (back, second left) and Olivia Ling (back, fourth left) in Kuching.

KUCHING: All are invited to attend a series of activities during the ongoing cross-state tour of ‘The Prodigal Son’ — a Chinese movie directed by Bjarne Wong.

According to Wong, the tour is a chance for fans to get up close with cast members of the movie. It kicked off last Sunday with a press conference and ‘meet-and-greet’ session at Café Café restaurant near Song Plaza here, followed by a movie premiere at The Spring.

The next screening took place at Star Cineplex here on Monday.

Yesterday, the tour made its stop Tanahmas Hotel in Sibu, where Wong shared his view on the movie with the audience. It was be a good opportunity for fans to know more about ‘The Prodigal Son’.

Today, Wong and his entourage are still in Sibu and will attend a meet-and-greet session at Wisma Sanyan.

“We will be joined by our special guest Soo Wincci, who will also be singing one of the theme songs from the movie at Wisma Sanyan,” he added.

For those in Miri, it will be a golden opportunity to meet the cast during a meet-and-greet session at Merdeka Mall this Saturday, scheduled to commence at 7.30pm.

The final premiere will take place at Star Cineplex Miri, at 7.30pm this Sunday.

“During the meet-and-greet, we will have several exciting activities for the fans, including sharing sessions with cast members, as well as games where we will be giving out lots of prizes.

“Moreover, those who attend the sessions will each receive a postcard to be signed by the actors. This will be an exciting, memorable experience for fans,” Wong added.