Measures in place for orderly devt 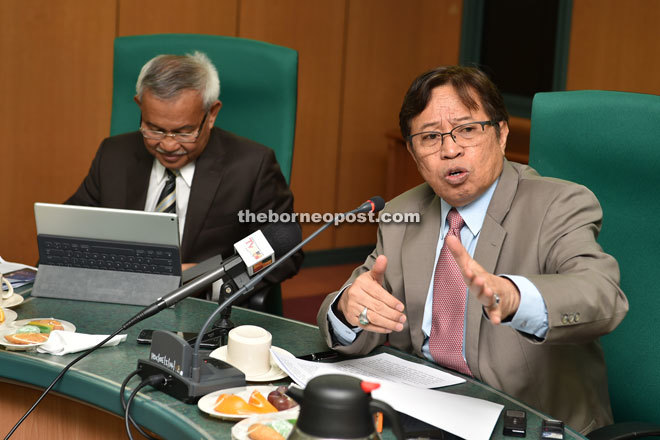 Abang Johari explains a point during the press conference yesterday. With him is Talib. — Photos by Tan Song Wei

KUCHING: The Housing and Urbanisation Ministry has drawn up several initiatives to protect the state from a host of issues that usually accompany a growing economy, namely squatters, congested village settlements, security, social amenities, employment and housing.

Its minister, Datuk Amar Abang Johari Tun Openg, said: “If these issues are not adequately addressed in a holistic manner, it can lead to, among others, social conflicts among disenchanted groups, increase in crimes, urban poverty and overcrowded towns and villages.”

Abang Johari stressed that urban renewal issues were very important in the state because based on the Population and Housing Census carried out in 2010, 52 per cent of the state’s population live in urban areas, mostly in Kuching, Miri, Bintulu and Sibu.

“And because of the impact, we have to redevelop certain parts of Kuching, Bintulu, Miri, Sibu and Kapit in order to provide all the amenities for this urban population.”

One of the initiatives to keep things in order is to establish a State Urban Renewal Committee (SURC) to coordinate the various initiatives to address urban renewal issues, propose solutions to urban redevelopment and resettlement issues, and to ensure public amenities in urban resettlements are well coordinated.

Abang Johari told a press conference here yesterday that another key function of the SURC was to look into the funding requirements for the provision of public and social amenities in urban redevelopment areas.

Under the present cabinet, this means Abang Johari would be its chairman, Datuk Talib Zulphilip its deputy chairman, and Datuk Abdul Karim Rahman Hamzah as one of its members.

Personnel from all relevant ministries and agencies such as state financial secretary, Ministry of Resource Planning and Environment, Ministry of Infrastructure and Transportation, Ministry of Welfare, Women and Community Wellbeing, State Planning Unit, Land Custody and Development Authority (LCDA), Housing Development Corporation (HDC) and Land and Survey Department, would sit in as committee members.

The ministry will soon conduct a lab to formulate this framework.

In addition, his ministry would devise a mechanism to create and share urban renewal indicators and statistics for planning and decision-making purposes.

“Currently, such data is not readily available. They are scattered among various agencies. But through systematic data collection and sharing, we will be able to better monitor urbanisation trends and development.”

Abang Johari said his ministry, in collaboration with relevant bodies, would also undertake stock taking and stakeholders’ analysis of their respective roles in the urban renewal processes so that a more coordinated approach could be initiated to minimise negative impacts of urbanisation.

Further, his ministry would continue to intensify its efforts in planning and developing the on-going `Kampung Redevelopment Projects’ through the Land Custody and Development Authority (LCDA) and Housing Development Corporation (HDC).

“These projects are part and parcel of the government initiative to tackle the issue of congested villages and demand for affordable housing and social facilities, including for the extended families.

Abang Johari said his ministry would also ensure that these urban redevelopment initiatives would generate jobs, create business opportunities, and provide a safe and healthy living environment for the residents.

“This is being carried out in collaboration with the other agencies and stakeholders,” he said, adding that due attention would also be given to provide affordable housing.

“The Ministry will also continue to work closely with the Land and Survey Department to identify state lands for its land bank for future public housing development.”