MCC: no to residence for business outlet 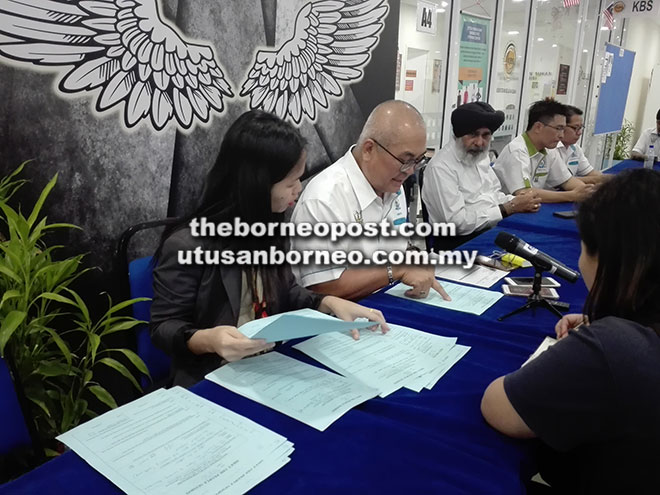 Yii (seated second left) goes through the complaints filed by the members of public at UTC with councilors and a council staff (seated on Yii’s right).

MIRI: The conversion of residential houses for commercial activities is a seemingly insurmountable challenge for Miri City Council (MCC).

Despite issuing warning notices followed by stern action, the number of illegal business run from converted houses did not decline. In fact, converting residential houses for businesses such as eateries, workshops, tuition centres and laundromat seems to be the trend.

Miri mayor Adam Yii admitted such matters pose tough challenges to the council and put it in a difficult situation especially in the enforcement of the by-law.

Speaking to the media after MCC’s meet the people session at Urban Transformation Centre (UTC) Miri last Friday, Yii said the council has no means to stop the people from earning an income by doing business.

“The council always supports people who wants to spur the city’s vibrant business activities. However, converting houses or part of the house at residential areas for business purposes including having roadside stalls totally contravenes the local government by-law ordinance,” he said in reply to a complaint about a coffee shop operating at PermyJaya Newtownship’s residential area.

He said under this by-law, the operation and use of residential houses for commercial activities is prohibited because it involves public safety and poses health issues.

Yii added that the noise and smoke emitted from cooking and food preparation in residential areas is a public nuisance to the other residents in the neighbourhood.

In addition such business activities may cause traffic congestion in the area as there is usually no proper parking space and indiscriminate parking may contribute to road accidents besides being a nuisance.

He continued by saying that usually such illegal food and

Other than these, such illegal business premises are usually fire hazards due to none compliance to fire safety, thereby endangering the lives.

On this matter, he hopes that owners of such illegal outlets would voluntarily close their businesses for safety concern.

Otherwise, he said, the council would be forced to conduct enforcement action as a last resort.

“This issue not only affects the council, but involves Land and Survey Department, Ministry of Domestic Trade, Cooperative and Consumer Affairs as well as other relevant agencies.”