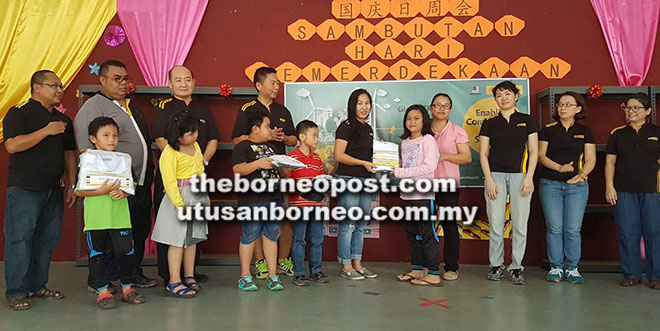 One of the Maybank volunteers hands over school uniforms to a girl, as SJKC Chung Hua Sibuti headmistress Emily Tiong (fourth right) and others look on.

MIRI: More than 50 employees from Maybank Miri cluster branches and business units brought cheer to the pupils and teachers of SJKC Chung Hua Sibuti during a charity outing there on Saturday.

He pointed out that under this CR initiative, each cluster branch and business unit of the financial institution would conduct outreach programmes for the communities where the bank operates.

For SJKC Chung Hua Sibuti, the Maybank volunteers helped repaint the building’s walls, repaired broken door frames at the school toilets, donated uniforms to 10 schoolchildren from poor families as well as four iron racks and 10 boxes of A4 papers to the school.

“We, the (Maybank) team in Miri, are very excited to be part of over 20,000 Maybank employees worldwide who observe this Global CR Day,” he said.

The Global CR Day was introduced in 2010 in celebration of Maybank’s 50th anniversary.