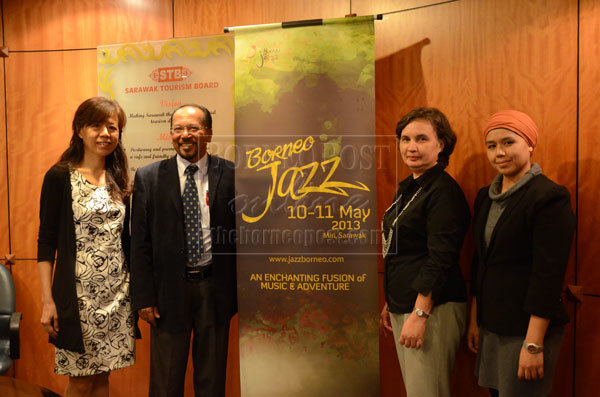 KUCHING: Dr Mornie Kambrie is the first of many lucky draw winners to get a free entrance ticket to the Borneo Jazz music festival.

He found the ‘lucky number’ sticker under his cup during his MASwings flight MH3201 from Kota Kinabalu to Miri yesterday morning.

The giving away of the free ticket is a special promotion between the festival organiser Sarawak Tourism Board and MASwings which also gives special fares up to 70 per cent off on flights to the festival cities in addition to the lucky draws on board the plane.

The board promises more lucky draws to passengers of MASWing’s flights to Miri and Kuching to win passes to the Borneo Jazz and Rainforest World Music Festival.

On Tuesday, the board also signed an agreement with Malaysia Airlines Berhad to be the presenting sponsor for the Borneo Jazz and Rainforest World Music Festival for the next two years as well as to pave the way for more fare promotions in the near future.

The Borneo Jazz Festival will be staged on May 13 and 14 at the ParkCity Everly Hotel in Miri featuring jazz bands from around the world. There will be side-events such as an outreach program that provides jazz instrumental classes, booths selling local foods and crafts as well as a jam session at the end of the festival.

Pre-sale Borneo Jazz tickets can be purchased online at jazzborneo.comand and are available until May 12.

Meanwhile, the Rainforest World Music Festival will be held from Aug 5 to 7 at the

It will feature cultural music from throughout Borneo and all around the world.

Fringe events such as the Rainforest World Craft Bazaar, the Borneo Tattoo Expo at Damai Central, Food and Village Mart in Sarawak Cultural Village, and PustakaBookaroo which combines music, stories and craft from around the world with workshops for children aged seven to 12 where, among other activities, they will also learn to make books.