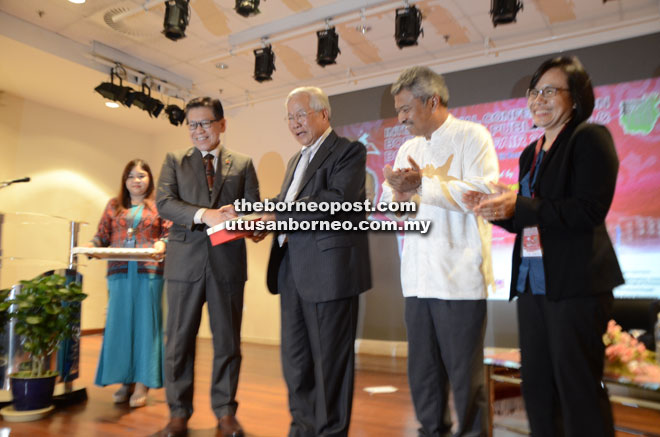 Manyin (centre) accepts a memento from Prof Kopli after the closing ceremony.

KOTA SAMARAHAN: There are 417 primary schools in Sarawak that record 10 or less candidates each for this year’s Ujian Pencapaian Sekolah Rendah (UPSR).

Education, Science and Technological Research Minister Dato Sri Michael Manyin believed that this situation is the factor behind the state placing 13th nationwide in UPSR ranking for so many years.

“We are trying to improve. This is also the main reason why we want to embark on consolidating and centralising primary schools with too few pupils,” he told reporters after officiating at the closing ceremony of the ‘International Conference on Borneo Book Publishing 2017’ in Universiti Malaysia Sarawak (Unimas) here yesterday.

According to the minister, these schools with low registry of pupils are mainly the rural ones like those in Baram and Kapit, but there are also those as near here as Serian.

He disclosed that he had met up with four representatives – one from a Chinese primary school while the other three are from Mission schools in the state – and had a long dialogue with them.

“At the beginning, they were a bit reserved on the idea of centralising these schools. The (representative from the) Chinese school thought that should they close down, they would lose their licence – that is the main reason (for their apprehension).”

In response to this, Manyin said he assured them that they could transfer the licence and used it to build new schools.

“There are many schools in town at the moment and many are overcrowded. The licence can be used to build schools in areas like Sibu, Miri or even in Kuching.”

Manyin said the state government would do its best to assist, adding: “I don’t think they (schools with critically low number of pupils) would lose their licence, if they were to use it to build new schools in town.

“We explained this to them (representatives) during the dialogue, but they would have to go back to the ground before we could proceed.”

On the issue of the missing Gawai Dayak holiday from the school almanac for next year, Manyin said he would not want to comment before meeting the concerned authorities in Kuala Lumpur.

“It’s better that I go there and discuss. As I don’t have the facts and figures, it’s not appropriate to talk about it now but I will meet the ministry concerned,” he said.

On children bringing too many books to school, Manyin said his ministry would look into this trend.

“Personally, I am in favour of less number of books,” said, citing Finland as among nations with the best education system in the world.

“There (Finland), students don’t do homework and only sit for examinations when they’re 16. This means they don’t carry books home,” he said.