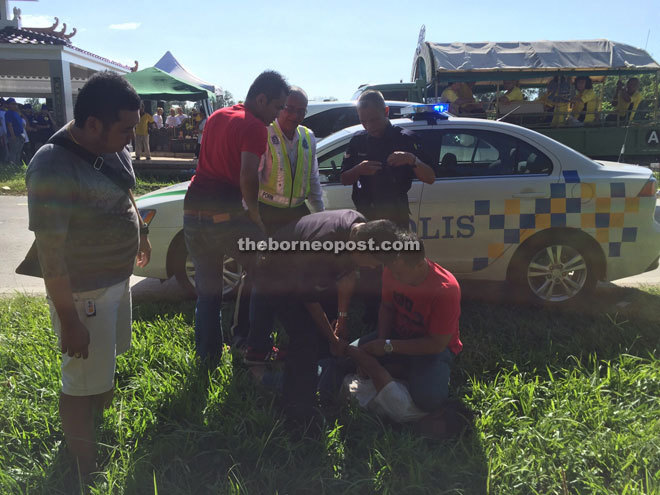 The suspect who rammed into a woman being detained by police at the scene.

MIRI: A man in his 40s was arrested yesterday after he ran down a woman near the Krokop Chinese cemetery in Sungai Baong.

According to eye-witnesses, the woman, in her 50s, was on her way to attend a relative’s funeral in the area when the suspect rammed into her, leaving the woman trapped between a funeral lorry and the offending vehicle.

The woman sustained injuries to her legs.

Enraged, the woman’s relatives immediately rushed to the scene and nabbed the suspect before calling the police.

It is believed that the suspect was under the influence of illegal substances during the incident.

He has been detained at Miri Central Police Station (CPS).

In a separate incident, a motorcyclist sustained bodily injuries after he veered off the road and crashed yesterday.

In the 3pm incident near the Jalan Cahaya junction, the lone rider was heading towards the airport area from the city centre when he lost control of the motorcycle and was thrown off.

The victim, who is in his 20s, was then taken to the hospital to treat his injuries.

Poor woman hope she is alright. It was just not her lucky day.