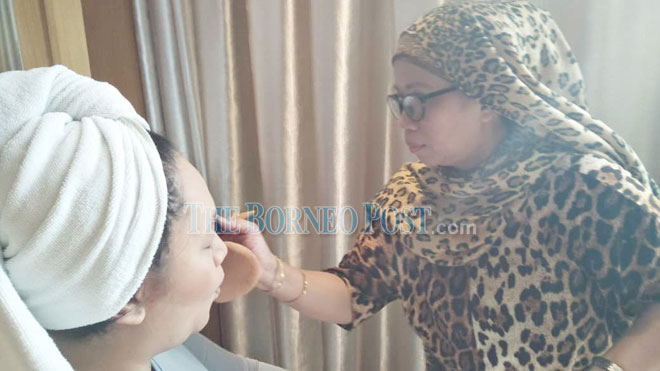 Masnah puts make-up on a customer before the movement control order.

MIRI: Make-up artists for weddings and events here are looking forward to resuming business and earning some income.

Recently, the government announced that film, television and advertisement productions may resume shooting from next Wednesday and this would include make-up artists.

According to a local home-based bridal service operator Masnah Jamin, she had to find alternative source of income during the movement control order (MCO) period since March.

“I have been making some side income selling ‘kelupis pandan’ even before the movement control order. As I was unable to carry on with my make-up and bridal services, I came up with another product – ‘serunding’ (meat floss) which sold very well,” she said in a phone interview yesterday.

She shared that some friends in the same line were not as lucky as they had no other sources of income during the MCO period.

“I advised them to look for alternatives like selling cookies for Hari Raya and Gawai Dayak which had helped some.”

According to Masnah when the MCO was imposed it was difficult for her to make ‘kelupis pandan’ as she could not go out to get pandan leaves. She then applied and got a permit to go out and get pandan leaves as well as deliver her products to customers.

“I sell them online and deliver to customers. There were some customers who bought in large quantities and promoted them abroad Poland and Ireland.

Prior the MCO, the enterprising lady had about two to three customers a day for her make-up service and made at least RM1,000 a month from her bridal service.

“I had a few customers who booked bridal services and had taken their attire home. But when the movement control order came into effect, many returned their attire and put their bookings on hold.

“Last week, some contacted me to make new arrangement but I told them to wait until June 9 to confirm if I can resume operation so as not to put anyone at risk,” she said, adding that she is focussing on kelupis pandan and serunding for the time being.

She urged other make-up artists to find alternative sources of income until their make-up or bridal business pick up.

“I thank our Chief Minister for Bantuan Khas Sarawakku Sayang as well as the Prime Minister for the Bantuan Prihatin National which had helped us cope during this trying time.

“There are Sarawakian entrepreneurs supporting us and buying our products. I also want to record my gratitude to them,” she concluded.