Make sure all schools abide by safety guidelines – Lee 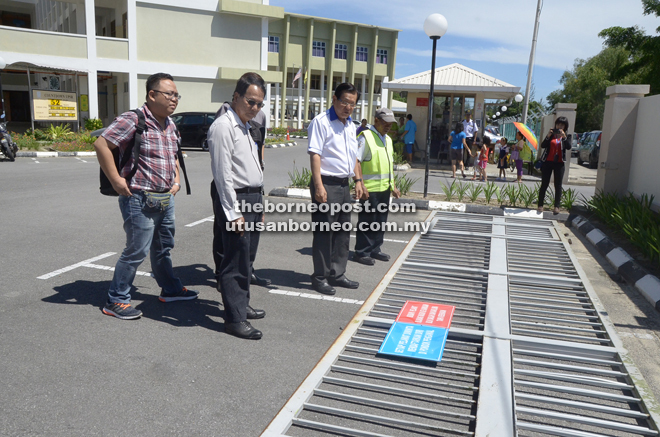 Lee (second from right) and others take a close look at the steel gate that came off its hinges.

MIRI: The Education Department must ensure that all schools in the state comply with safety guidelines to prevent accidents.

Assistant Minister for Land Transport and Air and Safety Datuk Lee Kim Shin, who made the call yesterday, suggested that the department work with the Occupational Safety and Health Department (JKKP) on this matter.

“We want the Education Department to make sure that all schools are safe, including regular checks on building structure,” he said at SK Lutong here yesterday.

At about 3.30pm on Sunday, a female security guard of the school died on the spot when the school’s steel gate came off its hinges and fell on her. Miri deputy police chief Supt Stanley Jonathan Ringgit said the 47-year-old victim, identified as Junatin Empaga, was attempting to close the 15-foot long gate when the tragedy happened.

Lee said such an incident never happened here, and hoped it would be the last.

He said he had informed the Education Department, JKKP and Public Works Department (JKR) to come up with a new design for the gate.

Socso, he added, had also been alerted to offer assistance to the late Junatin’s family.