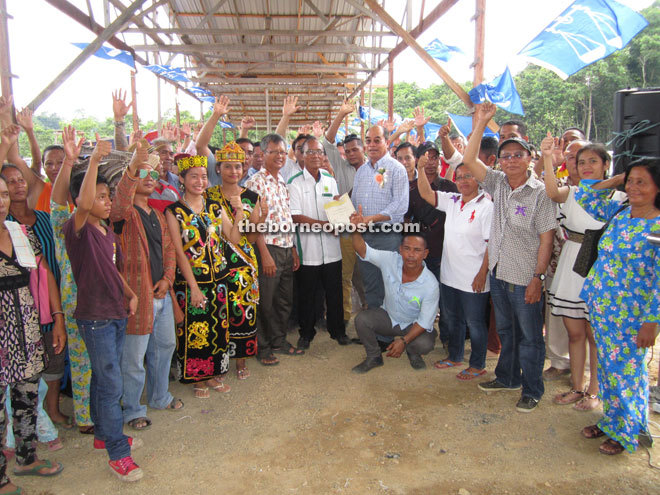 Entri handing over the certificate of completion for earth filling at the longhouse site to Nulai (sixth left).

TR Nulai Bilong said this is because the Marudi assemblyman has brought tremendous development to Marudi, Tinjar and Bakong, including areas in Sungai Seruas without favour.

“Entri contributed a lot to the longhouses and kampungs and the Chinese community in Marudi and we will continue to give him our undivided support,” he said to the applause of longhouses folks during a gathering at Kampung Serawong Tengah, Seruas, Bakong yesterday.

Among the projects Entri brought to them, he continued, were the Beluru Lapok road, electricity supply and the soon-to-be implemented clean water supply.

On the gathering, Nulai said it was to receive the certificate of completion for earth filling worth RM130,000 at their new longhouse, which he said came from Entri.

He also said Entri gave a grant of RM23,000 to the longhouse for buying building materials.

Meanwhile, Entri encouraged the longhouse committee to build their longhouse as soon as possible.