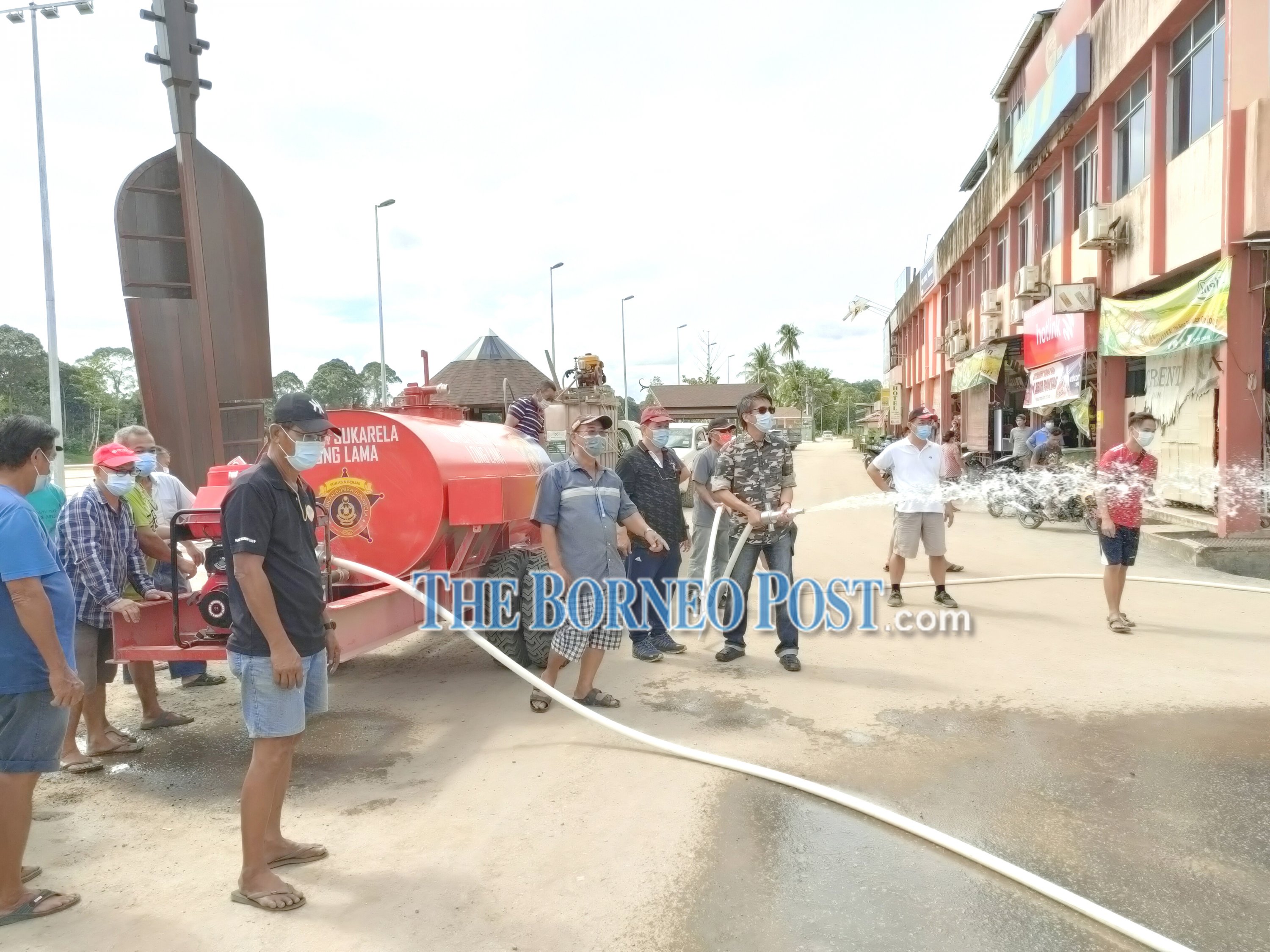 Dennis trying out the firefighting equipment during the launching ceremony.

MIRI: Gone are the days when people in Long Lama in Baram have to wait long hours for firemen from the nearest fire brigade to arrive to save them and their properties before the establishment of the volunteer fire squad in the town.

Long Lama town is situated 135km from Miri City, and more than two hours’ drive from the city.

By the time the nearest fire brigade in Miri City or Marudi town reached Long Lama, it would be too late to save the properties, said Telang Usan assemblyman Dennis Ngau.

“This was the situation experienced by Long Lama folks recently when fire broke out and burned down three buildings.

“Without any fire fighting equipment, they were just standing around helplessly and could not do anything to save the three houses and the occupants’ belongings,” said Dennis.

Dennis disclosed that he was told by Penghulu Desmond Yap that during the recent two fire incidents, it took less than 20 minutes for the three partially wooden houses to be brought down to the ground by raging fire.

This bad experience had prompted Telang Usan district officer Baru Tai to call for a meeting in December last year on how to address the issue.

“It was decided that a volunteer fire fighting squad be set up immediately. They will be trained and guided by the Miri Division Fire Department and Marudi Fire Unit personnel.

“At the meeting, it was also decided that a fundraising among the Long Lama folks be held to raise money for the Long Lama fire team to acquire at least basic fire fighting equipment,” said Dennis.

He added that in a short time more than RM30,000 was collected, after which they placed an order for the equipment which was delivered to the volunteer team early this month.

On its part, Sarawak Rural Water Supply Department (JBALB) will be putting up more fire hydrants in and around Long Lama town, including in the Rural Growth Centre (RGC) area to ensure sufficient water to put out fire during any eventuality.

Sarawak Energy Berhad (SEB) and its utility arm Sesco had been requested to do thorough checking on electrical wires in all premises to prevent short circuits.

A ceremony, officiated by Dennis, to receive the fire fighting equipment was held recently.

In his speech, the assemblyman thanked Baru and other leaders for taking the initiative to set up the volunteer fire squad, and urged the longhouses in the constituency to follow their good example.

He approved RM10,000 from his Minor Rural Project (MRP) fund for a building to store the fire fighting equipment.

According to Dennis, in 2019, he was informed by the state Fire and Rescue Department that a district-size fire station had been approved to be built in Long Lama town and a mini station would be built at the sub-district of Long Bedian.

“But maybe due to financial constraint currently faced by the country due to the Covid-19 pandemic, it has been delayed,” he said.

Also present were Baru, Desmond, heads of departments and over 50 folks of Long Lama.