Lobster burger now available in Japan for US$20 each

Wendy’s, the world’s third largest hamburger fast food chain after McDonald’s and Burger King’s, is now offering lobster surf and turf burger as well as caviar and lobster sandwich on its menu in Japan. The sandwiches, which include Canadian lobster meat, are available at 1,280 yen (about US$16.31) a pop. The burger, creamed with garden Sensation salad with lobster and caviar, goes for for 1,580 yen (about US$20.14)

New lobster burger: US$20 each

To put things in perspective, Wendys traditional single cheeseburger costs 480 yen (about US$6.12)

U.S. lobster fans won’t have the same luck, as there are no plans to offer such sandwiches and burgers outside of Japan. “No plans for a lobster-and-hamburger sandwich here in America,” Wendy’s spokesman Bob Bertini told The Columbus Dispatch.

“These premium specialty sandwiches are really designed for the Japanese consumer,” explains Bertini. “We have a joint venture in Japan and as part of that we have kitchens that help design sandwiches that make particular sense for that market.” 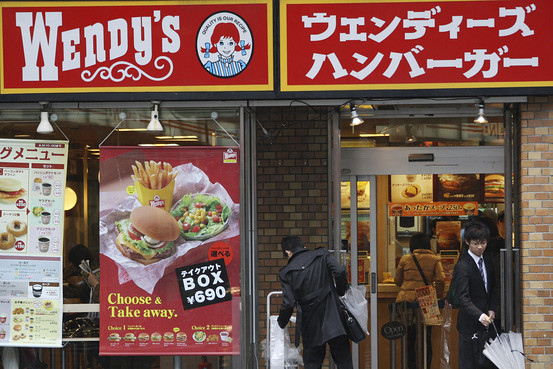 “Seafood is a huge part of Japanese culture and diet, and this just makes sense,” he added. The Japanese restaurant market is intensely competitive, Bertini said, “and this is a way to help differentiate ourselves from other chains in the country.” Wendy’s left Japan 2009, but reentered in December 2011. For its returned, Wendy’s reassessed its game plan and decided to situate itself as classier fast food.

The company’s joint venture partner in Japan is Ernest Higa, a Hawaiian-born businessman who previously introduced Domino’s Pizza (DPZ) to the Land of the Rising Sun. “He was a pioneer of the Japanese home delivery market, so he has lots of experience from a food standpoint in Japan. He knows what has worked well in the past and where the trends are going,” Bertini said.

In a 2010 interview with Columbia Business School’s Chazen Web Journal, Higa explained his entrepreneurial philosophy: “I have a basic bias that most successful concepts or products in the United States have a chance to be successful in Japan - but you have to adapt it for the Japanese marketplace.” Higa recounted how he took an established U.S. pizza chain, Domino’s, and made it work in a country where, according to conventional wisdom, pizza had little chance of catching on. “There were other U.S. pizza chains that were already in Japan that were not succeeding,” Higa said, “because there was an issue of taste profiles or how it was done. And I felt that if you adapted it right, it could succeed.”

Similar to his approach with Wendy’s now, Higa turned Domino’s pizza into more of an upscale commodity, customized for Japanese tastes. He offered toppings like squid, tuna and teriyaki chicken, “which you wouldn’t even think about in the United States.” And he changed what he called “the market positioning,” increasing prices and upgrading the product, transforming a mass market business into a gourmet brand.

Higa added that a product’s life cycle in Japan is very short, requiring the constant development of new innovations. “The Japanese consumer, as compared to the U.S., they want higher quality, higher service, generally speaking, and they also want variety.”

“It’s an affluent economy and a very sophisticated consumer” - which explains the lobster, caviar, and US$20 price tag on that salad.

All of them collectively poisoning the World, no doubt.