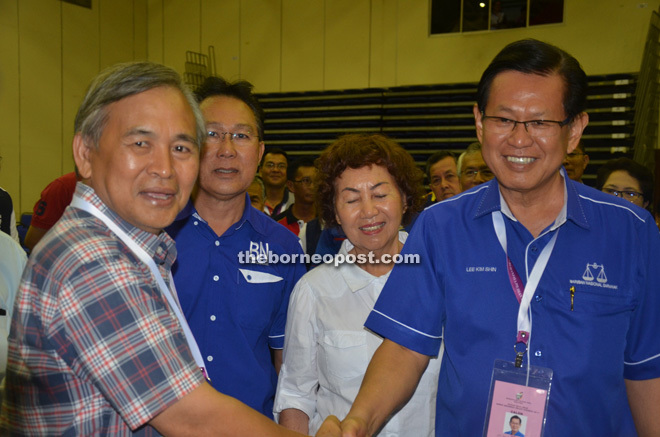 Dr Bob (left) congratulates Lee after the announcement of result.

On the other hand, Ting defeated ‘giant killer’ Alan Ling to wrest Piasau from DAP by polling 7,799 votes against 5,687 votes obtained by Ling of DAP.

“It is very sweet and meaningful to Sarawak United People’s Party (SUPP) to get back Piasau which fell into the hands of DAP in 2011 election and we pledge to work hard to get back Pujut which is still under DAP,” said Lee.

With the trust and confidence shown by the people, Lee pledged to work hard for development and progress of Senadin and Miri in general.

“I would like to thank the people for their support, confidence and belief in me as their assemblyman for the fifth term.

“I would also thank party leaders, party members and BN component parties for standing behind me and working together all these while not only during election,” he added.

Lee regarded both his and Ting’s victory as a mandate for Chief Minister Datuk Patinggi Tan Sri Adenan Satem to helm the state for five more years.

“Within two years our chief minister made 53 achievements and he needs a strong team and mandate and support from the people and his team,” he said.

Lee said his hard work for the last five years had been fruitful.

He added that the win by 58 votes in 2011 had prompted him to deliver his best to the people and the constituency.

“In the next five years I will concentrate and look into issues, matters and areas such as improvement in the quality and living standard of the people especially among squatters and resettlement areas and villages.

“I will also look into more economic and development opportunities for the people in Senadin,” he elaborated.