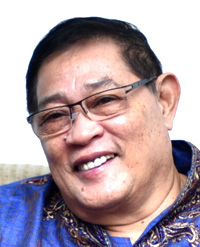 MIRI: The call for the use of Bahasa Malaysia (BM) in government events and press conferences seems to garner positive feedback here.

Political observer Dato’ Wan Zain Syed Mohdzar believes that while it is not wrong to use both BM and English, it is important to uphold the former’s position as the nation’s official language, as enshrined in Article 152 of the Federal Constitution of Malaysia.

He also acknowledges the situation in Sarawak, where both languages are allowed to be used either in official events or in administration.

“It’s sad because some of the leaders, including the MPs, have yet to master BM or English. As leaders, they must respect the Constitution of Malaysia and show good examples to the public. BM is the official language of our country, while English is the second (official) language that can be used in the Malaysian administration.

“The suggestion by (Port Dickson MP) Datuk Seri Anwar Ibrahim about using BM in government’s official ceremonies should be accepted open-heartedly – I support this recommendation.

“However, it is also not wrong to use both BM and English,” he told The Borneo Post yesterday.

Wan Zain pointed out the circumstances where there were many people’s elected representatives who spoke neither BM nor English in their day-to-day affairs, or during debates in the hall.

“This is sad. They’re born in Malaysia, but have no interest in using BM. Is this the result of the inconsistent Malaysian education system, which is affecting schools including the vernacular ones?” he said.

“I agree with Datuk Seri Anwar Ibrahim, with regard to leaders and government officials who take for granted the usage of the Malay language in government programmes, including press conferences.

“As leaders, they should be exemplary in upholding and preserving the dignity of the national language. Our leaders and our people must be fluent in and proud to use BM in every activity.

“BM is not an isolated language – it is the language of unity and language of learning in Malaysia and Indonesia,” he elaborated.

In a similar sentiment, Councillor Dominic Nyurang said as a true Malaysian, one must have this basic requirement – to know BM. He found it ‘very sad’ to know that some Malaysians did not even speak the country’s official language.

“Mastering BM will not make any Malaysian less intelligent; rather, it shows true patriotism and love for the country.

“Learning BM also does not mean that you have to neglect other languages. Master your BM, but strive to be fluent in other languages as well. To me, a situation where a Malaysian doesn’t speak BM, is unacceptable – it’s even worse if that Malaysian is a leader,” said the Miri City Council man.

At an event in Ayer Keroh, Melaka on Monday, Anwar was quoted as having said that leaders and members of official government councils must use the Malay language as a medium of instruction as part of the effort to uphold BM as a language of knowledge.

Anwar, who is Parti Keadilan Rakyat (PKR) president, said there were also press conferences held by leaders and organised by the government, where the language used was a mixture of Malay and English, which did not mirror the Pakatan Harapan-led government’s stand to uphold BM.

“I urge that all who want to have a press conference to do it all in Malaya; if there’s a need to answer a question in English, or (if) it’s an international conference, then you can talk in English,” he was quoted as having said.

The post ‘Leaders should be exemplary in respecting BM status as nation’s official language’ appeared first on Borneo Post Online.