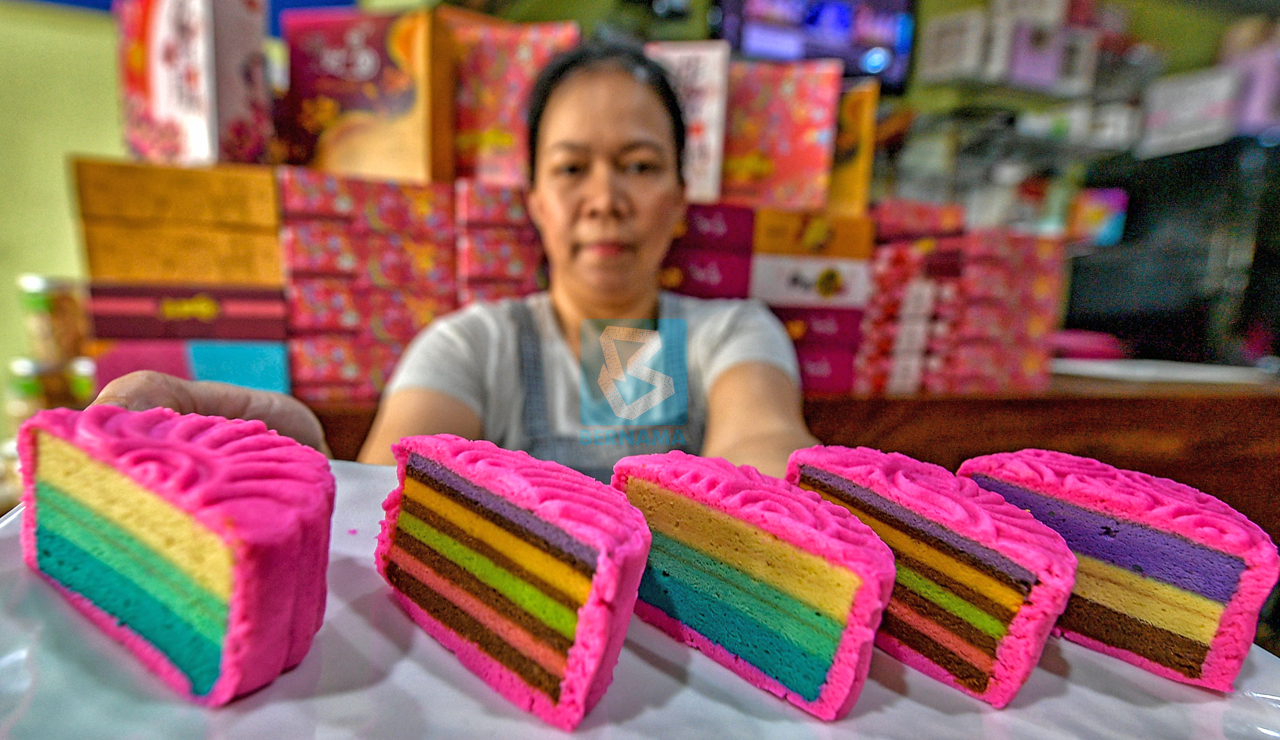 Ngui shows the “layer mooncake” at her bakery in conjunction with the upcoming Chinese Mooncake Festival. — Bernama photo

KUCHING: Mention kek lapis or layer cake and the first thing that comes to mind is the colourful dessert from Sarawak.

A popular after-dinner or tea treat among Malaysians, regardless of race or religion, it has also become a must-buy and souvenir for local and foreign tourists who visit Sarawak.

In conjunction with the Chinese Mooncake Festival to be celebrated by early September, Sarawak’s layer cake exponent, Maria Ngui Sai Moi has introduced “layer mooncake” for those who want variety and something unique.

The Mooncake or Mid-Autumn Festival is the second biggest Chinese celebration, usually celebrated in September or October, based on the Chinese lunar calendar.

According to Chinese belief, the Mooncake Festival is celebrated in conjunction with the emergence of a full moon that looks brighter than usual, hence the mooncake is a must and symbolic of the celebration as a day of uniting the whole family.

According to 43-year-old Ngui, who is of Chinese and Bidayuh descent, for the sake of maintaining Sarawak’s identity in a Chinese traditional delicacy, the idea of making a mooncake with ingredients usually used for the layer cake came about and many liked it.

Traditional mooncakes have a filling of red bean or lotus seed paste and salted egg yolk (symbolising the full moon) encased in a thin pastry skin.

“I had been toying with this idea for a while and finally gave it a shot for last year’s mooncake festival.

“Who would have thought that the response could be so encouraging that I received orders from as far as Sibu, Bintulu, Sarikei, Miri and Sabah too,” she said, adding that her shop located in Jalan Main Bazaar also has a halal certificate from the Islamic Development Department (Jakim).

Not surprisingly, mooncakes are also gaining popularity among Muslims throughout Malaysia.

The ‘snow skin’ is made of cooked rice flour without having to bake in the oven and the mooncake can be eaten straight away, while the ‘baked skin’ mooncake needs to be baked until its skin turns golden yellow like any other traditional mooncake.

“For the ‘snow skin’ mooncake, there are 10 flavours offered, the most popular being the Blueberry Cheese, Tiramitsu and Cappuccino, while the ‘baked skin’ mooncake has 12 different flavours,” she said.

Asked about the secret of her delish mooncakes, Ngui who started selling layer cakes in 2001, said she used high-quality ingredients such as imported butter.

She has also reduced the amount of sugar in her kek lapis and mooncakes to avoid extreme sweetness, especially for those who are health-conscious.

In a day, Ngui can bake about 5,000 colourful mooncakes with a variety of patterns, assisted by one employee.

If purchased in a large quantity, it will be packaged in a special box, perfect as a gifts.

For those who wish to make orders or view Ngui’s layer cakes and mooncakes, follow her on Maria kek lapis Facebook. — Bernama