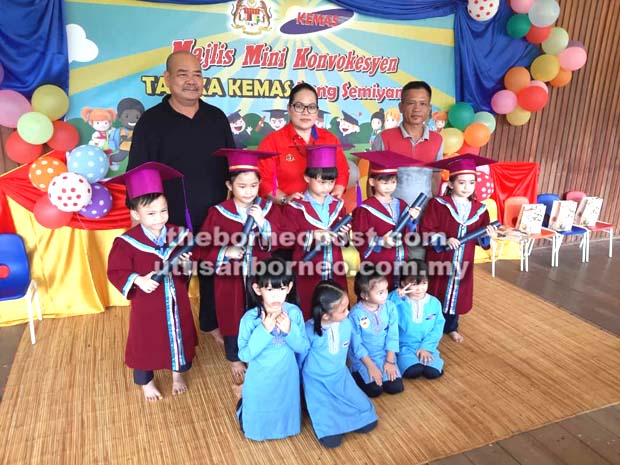 (Back row, from left): Danny, Betty and Johanes pose with the five pupils who received their certificate at the ceremony.

MIRI : Setting up kindergartens in residential areas especially in villages and longhouses is vital in this modern era as preschools play an important role in early childhood development.

According to Danny Lawai Kajan, the advisor of Tabika Kemas Long Semitang in Baram, with the setting up of these kindies, parents can ensure that their children will acquire early

education without them having to travel far and thus save cost at the same time.

as three or four years old which are also near to home,” he said when officiating at Tabika Kemas Long Semiyang Convocation Ceremony recently.

“Since its establishment in 2011, Tabika Kemas Long Semiyang has recorded an average increase of 10 pupils yearly.

This is a good sign and it proves that parents in rural areas are also concerned about their children’s early education,” he added.

According to Danny, the kindergarten was set up by Long Semiyang Village Safety and Security

Committee (JKKK) which was also chaired by him at that time.

The Welfare Department has also placed a teacher to manage the operation of the kindergarten.